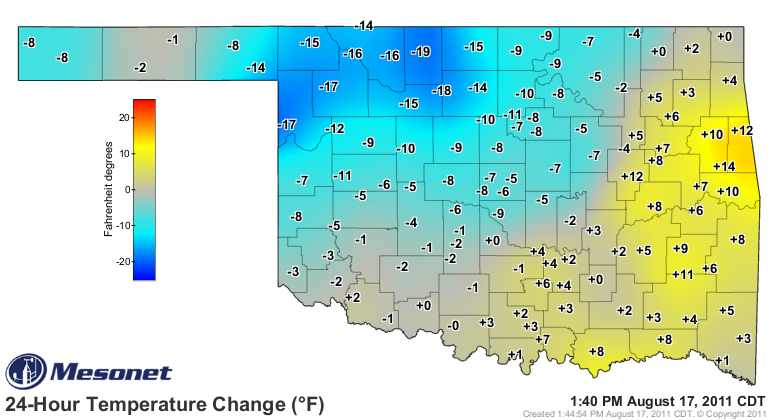 This boundary is expected to become diffuse or lift back north as a warm front on Thursday. That will still have the potential for a few showers and storms, but the chances remain on the order of 20% or so.

More importantly will be the winds. They are somewhat light and variable today due to the presence of the boundary, but southerly winds will return on Thursday and a more S to SW wind is expected for Fri and Sat. If that is indeed the case, then temperatures will really soar. Those more SW winds are not a done deal though as the relatively weak pressure gradient and the possibility of organized bands of storms passing nearby in Ks or Mo and even perhaps NW Ark will also provide the possibility of outflow boundaries which will wreck havoc with the local wind and temperature fields. Those events cannot be foreseen more than 12 hours in advance, and sometimes not even then. At any rate, if the SW winds for Fri and Sat do verify, then we will likely see daytime highs well above 100. If not, then daytime temperatures will still be near 100. Either way you look at it, it is still too hot.

And the heat index will add several more degrees to the air temperature so not only will it be hot, but it will also be humid. This combination of heat and humidity also leaves open the possibility of a few showers or storms for Fri and Sat. Unfortunately, few is the operative word and if anything the chances are expected to be less than 20% going into the weekend.

We are seeing some signs of a gradual shift in the pattern though. By early next week, the dominant ridge aloft is expected to become even stronger and shift further to the west. That will place us in a stronger N to NW flow aloft which with time will result in a gradual cool down. That could even begin as early as Sunday if the European Model is correct in bringing a front across the state by then. That should also be a more active pattern with regards to rain chances. Not going to bet the farm on that just yet though.