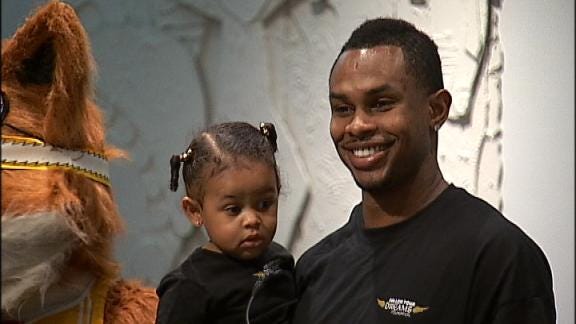 Meachem was at the Rudisill Regional Library in north Tulsa promoting his READ 60 program. READ 60 is an extension of his Follow Your Dreams Foundation, and is designed to promote childhood literacy. He spoke to a large audience of both adults and children about the importance of learning how to read and write.

A few interesting facts about Robert Meachem’s Tulsa connection:
? Robert graduated from Booker T Washington High School in 2003.
? Rudisill Library is located across the street from Carver Middle School, the school that Robert attended.
? Robert’s mother says when he was growing up, he was a patron at that library.
? In June, Robert will be holding a skills camp for kids who participate in READ 60. The camp will be held at Booker T.
? Robert says his favorite book to read as a child was “The Little Engine That Could”