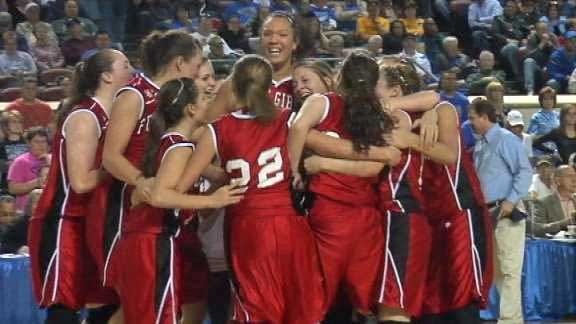 OKLAHOMA CITY— The No. 3 ranked Fort Gibson Lady Tigers battled back from a nine point deficit to oust the No. 2 Vinita Hornets.

Much of the first half was back and forth as both teams raced up and down the court in a constant battle for possession and points.

Fort Gibson junior Julia Hill scored basket after basket to put the Lady Tigers on top at the break by a score of 34-30.

Vinita battled and didn’t let the lead get far from sight.

At the midway point, the Lady Tigers were led by Hill who already racked up 16 points while Jodi Glover tallied seven.

The table was set for another tight-knit second half inside The Big House.

Vinita freshman Tyrney Steinhoff came out in the third on fire, scoring the quarters first eight points on a jumper followed by back-to-back three pointers to take the 38-34 lead.

After a technical foul against Fort Gibson, Vinita’s two made free throws to give them the 40-34.

But the Hornets didn’t stop there. Junior Caitlyn Spurgeon used thee possessions to push the lead to eight points just before the end of the third.

Want to see the rest of the high school hoops actions across the state? Check out the Oklahoma Sports Locker Room!

By the start of the fourth Vinita was in the lead 46-40, but that was the last time they would lead.

The six point lead was erased after a field goal by Kirby Parnell followed another by Nana Wallace then a wide open three-pointer by freshman Savannah Gray to tie the game at 53-all.

Undefeated Fort Gibson called a time out with 52 ticks of the clock left and ran it down to 5 seconds and when Vinita went for the steal Wallace was wide-open at the elbow. She took two dribbles and put in the post shot for the two point 55-53 win.

Vinita was paced by the scoring of junior Spurgeon who led all scorers in the game with 19 points. Steinhoff finished with 12 pints while Kamry Chamberlain added 11.

Coach Scott Reed and the Hornets finish the season at 22-3.

Fort Gibson’s hill finished with 18 points while Wallace tallied 14, with seven of those points coming in the fouth.

The Lady Tigers improve to 28-0 on the year and will playfor thegold ballSaturday at 2 p.m. at the Oklahoma City Fairgrounds.

For more on this 4A State Semifinal game check out CoachesAid.com's semifinal recap.