Ardmore Holds off McGuinness to Advance 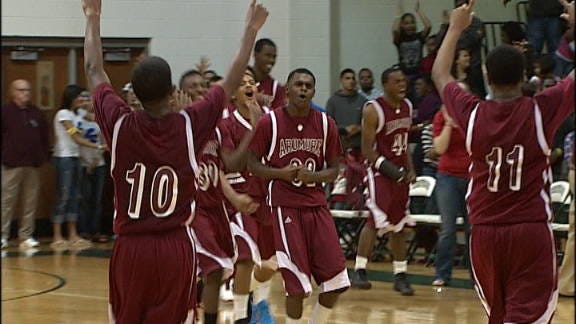 NORMAN, Okla. – The Ardmore Tigers punched their ticket to the state tournament with a thrilling 47-45 victory against Bishop McGuinness on Friday at Norman North High School.

McGuinness controlled for much of the game, including a six-point lead at halftime.

The Irish led by as many as 10 points in the second half before starting to derail late. During one span, McGuinness missed six of eight free throws allowing Ardmore to jump right back in the game.

Down the stretch, the Tigers’ Trey Cohee drove the lane and scored to put his team up 43-41.

After the Irish tied it up, they got the ball back and Joe Edwards converted to give McGuinness a 45-43 lead.

But Ardmore would rally back once again. After tying the game, the Tigers controlled the ball with a chance to win. Cohee attempted a spinning teardrop layup that rimmed out, but Tarail Taulton was there for the tip-in with 3.9 seconds to play.

After a series of timeouts, McGuinness inbounded and threw up a shot from just within halfcourt but missed, sealing the win for Ardmore.

The Irish will face El Reno on Saturday in Yukon.

Ardmore Holds off McGuinness to Advance