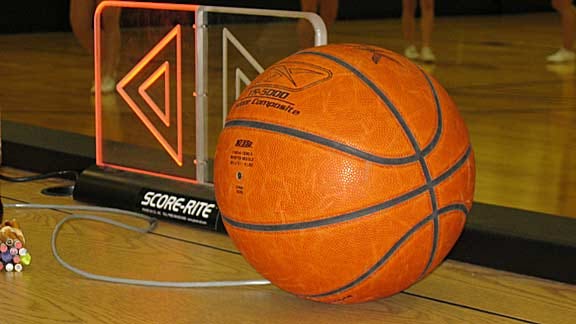 HENRYETTA, Oklahoma--After a two week layoff due to the blizzard that roared across the state, things finally melted enough to allow basketball Friday night.

The Henryetta Knights and Lady Knights traveled to Eufaula where the boys fell 57-34 but the girls won 59-52.

In action from the boys game, the 3A No. 13 ranked Ironheads led 11-7 after a ragged first quarter but Eufaula pulled away from the Knights 27-11 at halftime.

With both Jake and Chet Caywood sidelined due to an attack of chicken pox, Henryetta ended the third quarter on a 9-1 run, though Eufaula still led 44-22.

The Lady Knights had a 12-9 first quarter lead and in the second they survived a technical foul call to lead at halftime 36-24.

The home team then led a furious late charge but after getting within ten points, Eufaula inexplicably refused to foul in the last minute, so Henryetta got a 59-52 win.

Sophomore Miranda Harjo had 23 points and was helped by junior Ashton Peters who totaled 11 and sophomore Lauren Flanary who finished with eight points on the night.

Coach Kolby Johnson had this to say after the game: “You could tell we hadn’t played in two weeks, didn’t move very well on defense, which led to too many fouls. With the playoffs coming up, we definitely wanted to play, get back into a rhythm. We’re headed in the right direction.”

Saturday night Henryetta faced Hasketll for a pair of makeup games in which Henryetta won both of them over the Haymakers, 71-65 and 67-52.

Haskell went on a 11-0 run, to which Henryetta answered with 11 straight points of their own and the scoreboard read Henryetta 38-29 halfway through.

The Knights had a huge game from Moudy, Haskell who helped trim a 43-32 gap down to 51-44 with three quarters played.
It was a closer score than it should have been, but Henryetta won 71-65.

Moudy finished with 34 points, 14 rebounds and one assist, Johnson and Mouss had 15 points a piece.

In the girl’s game the Lady Haymakers scored seven of the game’s first ten points but Henryetta went on a 10-3 spree to cut Haskell’s lead to15-12 by first quarter’s end.

After the intermission, the Lady Knights sank ten straight points to start the second half and Henryetta led 50-40 at the end of the third quarter.

The fourth quarter passed and Henryetta took the game 67-52.

Tuesday wraps up the regular season at arch-rival Morris before the Class 3A playoffs start for the Knights (9-9) and No. 6 Lady Knights (14-4) this Saturday in Eufaula with the girls game at 6:30 p.m. and 8 p.m. for the boys.