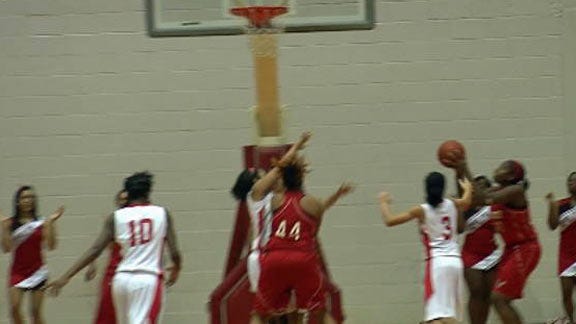 Teiara Rich's shot with 2.5 seconds remaining in the game lifted Del City to a 37-36 victory over host Carl Albert in the semifinals of the Titan Classic.

Carl Albert had taken a 36-35 lead after Gioya Carter sank two free throws with 13.4 seconds left. But Del City answered right back when Toni Smith found Teaira Rich just inside the 3-point line at the top of the key. The senior came up big, sinking the jumper to give Del City the one-point lead.

Del City missed five free throws in the final minute to allow Carl Albert to stay in the game.

Carl Albert led 19-15 at the end of the first half and most of the third quarter.

Del City's Mariah Jackson made a layup down low and was fouled on the shot with 41.1 seconds left in the third and her made free throw tied it up at 28.

Jackson made another bucket in the paint to give the Lady Eagles the 30-28 lead, a lead that lasted most of the fourth quarter.

Del City will face rival Midwest City in the Championship of the Titan Classic at 7:00 on Monday.

Carl Albert will face Millwood for third place at 4:00 on Monday.