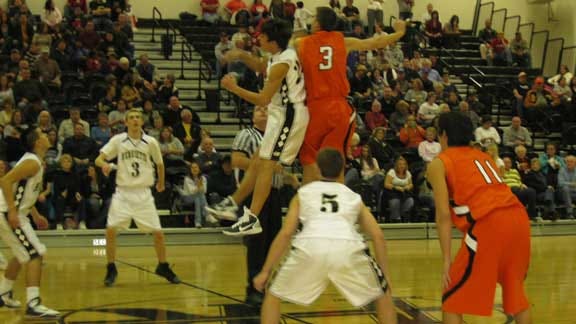 You could say that it’s just a game. You would be partly right. Morris-Henryetta is just a series of games. So are Jenks-Union and Eufaula-Checotah, for that matter. These rivalries are often about so much more than just the games themselves, though.

No matter what sport, it’s always going to be intense when the Eagles and Knights face off; it’s going to be hard fought, and emotions are going to run high. Followers of both sides walked away Friday night partially happy, as Morris used a last-second layup to win the boys game 48-47, while the Lady Knights outlasted the Lady Eagles 57-55.

The Eagles shot off to an 8-0 lead, but Henryetta rallied back to take a 17-15 advantage after the first quarter. The Knights scored the first six points of the second quarter and led 27-21 at the halftime break.

Several Henryetta players got into foul trouble, and Morris came charging back, the 33-21 Knights lead dwindled to 37-36 with one quarter to go.

With 61 seconds left on the clock, Henryetta had a 47-44 lead, the Eagles got to within one, and then Hayden Sharp made the play to down the Knights for the second time this school year.

Sharp made a layup off a Jacob Wares pass, sophomore forward Blake Johnson launched a 3-pointer with 2.5 seconds left, it hit the back and the rim and clanged out, leaving Morris the winner in a 48-47 stunner.

Before that, however, the girls’ game featured two of Class 3A’s Top 10 teams, with Morris ranked No. 5 and Henryetta No. 8. The Lady Knights started out jittery, Morris ran off the first 13 points.

Henryetta came back to cut the Lady Eagles’ lead to 15-12 with three quarters to play. The frenetic pace continued during the second quarter, and the visitors had a 30-29 edge at halftime.

After the Okmulgee County Tournament this week, the next opponent for the Knights (5-6) and Lady Knights (8-3) will be Preston, the Pirates and Lady Pirates visit on January 25, girls tip at 6:30 p.m, boys at 8 p.m.