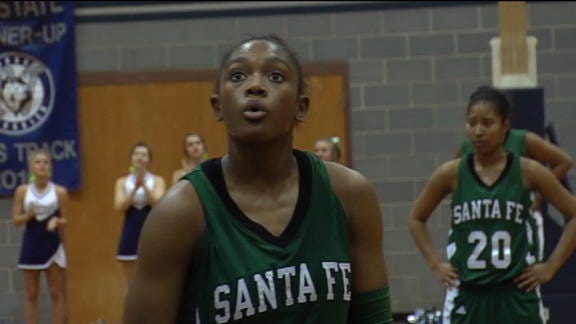 EDMOND, Oklahoma -- Edmond Santa Fe took round 2 of Edlam Tuesday with a 43-38 win over Edmond North.

It was the 2nd meeting in a month between these two 6A girls powerhouses, the Wolves also taking round 1 in the championship game of the Edmond Open Tournament in December.

It also featured two of the top high school girls basketball players, Edmond Santa Fe's Courtney Walker and Edmond North's Elizabeth Donohoe. Walker is committed to Texas A&M and Donohoe will suit up for the OSU Cowgirls next season.

Edmond Santa Fe remained unbeaten on the season, improving to 12-0, while North falls to 7-5.

It was close the entire game, North leading 12-6 after the first quarter, but Santa Fe would come back and take a 19-18 lead into half.

The Wolves had a two point advantage heading into the fourth. The Huskies cut it to 38-36 on a Donohoe bucket with less than a minute left in the game. But the Wolves would make crucial free throws late to hold off the Husky surge.

Walker led all scorers with 21.

Donohoe had 17 on the night and Anna Kimsey added 12 for Edmond North.

The teams will meet again at Edmond Santa Fe on February 11.