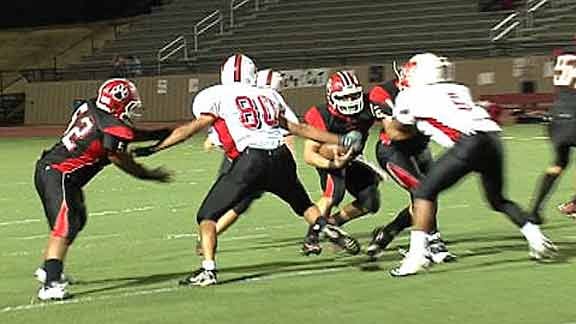 The win is Stratford’s first ever semi-final win, and the school’s first ever berth into the state championship game.

Stratford got on the board first, going up 7-0 just three minutes in the game, before Morrison answered making it seven all.

Later, Stratford's senior running back Regand Ardery ran it on from the 11-yard line for a touchdown to put Stratford back on top 14-7 with 7:21 left in the first.

Then in the second, Morrison's Dylon Quinata scored on a seven yard touchdown run to tie the game 14-14 and the teams would go to the locker room tied at the half.

In the third, Morrison fumbled and Stratford recovered and started a big drive which resulted in Chase Chamberlain’s29-yard touchdown run to put Stratford up 20-14, but the extra point was no good.

Later Stratford intercepted a third pass from Morrison and took over at their own 32-yard line. The Bulldogs moved the ball on the ground and scored with 1:50 still on the clock in the third to go up 27-14.

On to the fourth, Stratford's Ardery found the end zone for the third time with a four yard touchdown run putting Stratford up 33- 14 early in the fourth.

The Bulldog defense came out and held Morrison on downs, which closed out the evening at 33-14, with the Bulldogs on top.

Morrison finishes the season at 10-4 and Stratford will take on Woodland who is undefeated on the season.

That game date andtimehave not beenannounced,but it will be played at Boone Pickens Stadium in Stillwater.