Class 4A Top Games to Watch: Round 1 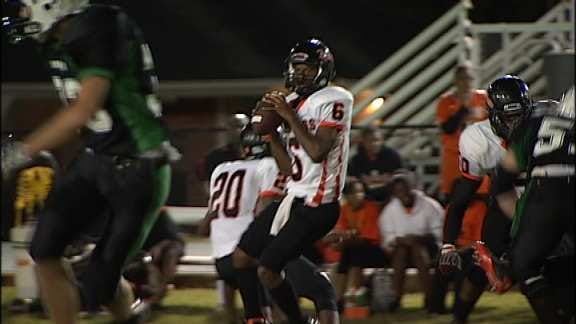 OKLAHOMA CITY -- The first round of playoffs seems to always be a matchup of the top-seeded teams in each district and those few teams that narrowly squeezed into the postseason. In 4A, most of the action will happen in the dead center of the bracket.

Douglass (8-2) is primed and ready for the playoffs, having hit their streak late in the season. The Trojans had two losses in to start their season, but beaten everyone in their path in since, averaging a 39.4 victory in the second half of the season. The team was runner up last year, losing to Star Spencer.

They’ll be playing with tenacity and looking for another shot at the state title, as they square off against Elk City (8-2). The Elks have also only fallen twice this season—once to title contender Clinton and the other to Bishop McGuinness. Elk City hasn’t been quite as dominant as Douglass has this season, but will no doubt be thirsty to make it past the first round. Last season, the team gave the Class 4A champs of Star Spencer a run for their money, but fell short in the final quarter.

The Bishop McGuinness Irish (7-3) had a tough season early on, facing Douglass, Bishop Kelley and Millwood. Their ability to play consistently has been questioned, but the Irish are coming off three late-season wins, so Coach Kenny Young’s team will be hungry to face-off against Glenpool (8-2). It certainly won’t be an easy challenge though, especially considering it’s on the Warriors’ territory. You can bet the Glenpool fans will make it that much harder for the Irish to leave with a win. The Warriors have been a threat to everyone this season, falling only to the powerhouse of Cascia Hall and slipping to Douglass by two points in week nine. They made an early exit last season in the first round. It was a game that not only bumped them from the playoffs, but snapped a 23-game win streak. They’ll be back for blood as they play host to Bishop McGuinness.

Coach Greg Willis will have a challenge on his hands, as he and his Harrah Panthers (8-2) head to Elgin (7-3) in their first game of postseason play. The Panthers have had a respectable season this year, falling only to Glenpool and Douglass, but finished their regular seasonon a low note when they lost to 41-7 in week 10. They’ll have to rebound from that loss and focus on bringing every strength of the season to the table when they face Elgin. The Owls are also coming off a week 10 loss and will be looking to keep their playoff dreams alive. It may be an easier task for Elgin however, as they’ll have the crowd on their side. Both teams will likely be playing with a chip on their shoulder, having a few losses under their belt. They’ll have something to prove—to their fans, to the competition and to those who doubt whether they deserve to be there.

Class 4A Top Games to Watch: Round 1