Top Five Teams in Class 6A 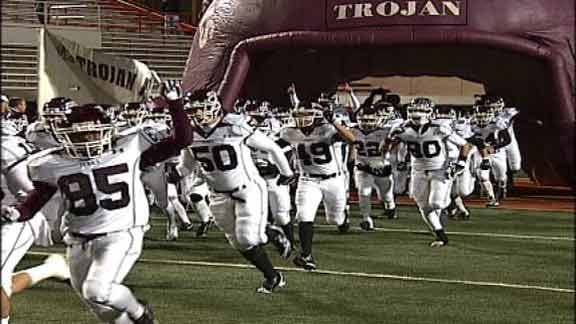 OKLAHOMA CITY -- There is a well-represented group of schools that sits atop Class 6A. Since the classifications expanded to 6A in 1992, just four teams have won a state title.

The Norman Tigers claimed the first Class 6A Gold Ball, the Midwest City Bombers have taken home two, Union has claimed five championships and the Jenks Trojans have won 10 – including six straight.

The old guard is well represented in the top of the Class 6A breakdown.

The Jenks Trojans are arguably the top team in the state after dominating nearly every opponent that they lined up against. Jenks is averaging 52 points per game, while holding opponents to 8.6 points per game. In fact, the Trojans’ defense has allowed more than 10 points on just three occasions this season. Quarterback Sawyer Kollmoregen has been nothing but efficient this season, completing 73.8 percent of his passes, while throwing 31 touchdowns and only one interception. The two-headed monster in the backfield of Zach Langer and Alex Ross – who is also second on the team in sacks with five – have combined for 1,427 yards and 21 touchdowns this season.

Lawton continues its tradition of playoff berths, but was able to grab an undefeated district title in a talented district. The Wolverines averaged nearly 40 points per game while giving up just nine, an average perhaps floated by an 86-0 win over U.S. Grant. Daequan Wojciechowski has led Lawton’s offense all season, rushing 194 times for 1,139 yards and 14 touchdowns. Oregon State commit - and No. 15 on the Oklahoma Sports Top 30 - Tyrequek Zimmerman has 10 receiving touchdowns on the season. The Wolverines are led defensively by D.J. Ward, who is second on the team in tackles with 75 and leads the team with eight sacks.

Midwest The Bombers are no strangers to district titles, playoff berths and are the last team not named Jenks or Union to win a state title. In seven district games, Midwest City scored an average of 33.8 points per game, while holding opponents to 11 points per game. The Bombers have had no trouble moving the ball, quarterback Greg Austin averaged 168.5 yards per game through the air, while James Flanders averaged 123.1 yards on the ground. Defensive end Trevon Lewis – who was No. 25 on the Oklahoma Sports Top 30 – has amassed 63 total tackles, while racking up 10 sacks this season.

Union is another team that is no stranger to lofty expectations and great results. The Redskins have won the last two Class 6A Gold Balls and has won four of the last six, losing to rival Jenks in 2006 and 2007. Union struggled against Bartlesville in Week 7, but bounced back and outscored its last two opponents 107-27 to head into the playoffs rolling. Quarterback Kale Pearson has been a threat through the air and on the ground scoring eight passing touchdowns and four rushing. Hunter Atiya has amassed 1,058 yard through the air, while completing nearly 65 percent of his passes and scoring 11 touchdowns.

The Tigers are the only non district champion on the list for a reason. Broken Arrow went 6-1 in one of the toughest districts in the state and gave Jenks their closest contest of the season. The Tigers have scored more than 50 points this season in five contests this season and have the weapons to challenge the top teams in the class. Oklahoma commit and Elite 11 quarterback Archie Bradley may have the strongest arm in the state, which makes sense given his status as a top-10 pitching prospect in the upcoming MLB Draft.

Top Five Teams in Class 6A