Norman Tigers Put Up 70 Points in Blowout of Muskogee 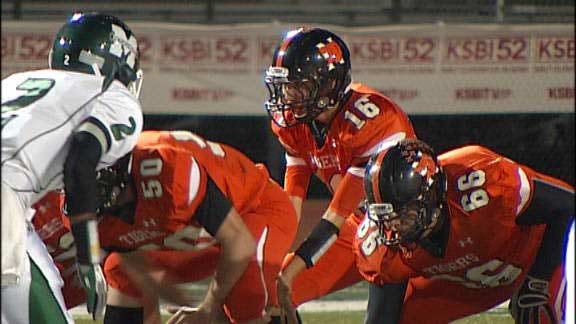 NORMAN, Oklahoma – The Norman Tigers turned in their most dominant effort of the season Friday, throttling the Muskogee Roughers 70-3.

The Tigers (8-1, 5-1) got on the board quickly, with Donovan Roberts breaking a 52-yard touchdown run on the game’s first drive. Muskogee (5-3, 3-2) cut into that lead with a field goal, but it was all Norman from there.

Roberts proceeded to score four touchdowns in the first half alone, and Tra Martin returned an interception for a defensive score. The Tigers went into halftime with a commanding 56-3 lead and continued to build from there.

The Tigers’ 70 points were the most they scored this season, and their victory sets up an important showdown with Jenks (9-0, 6-0) next week. If Norman wins that game, it will force a three-way tie between Norman, Jenks and Broken Arrow for No. 1 in the district.

In such a situation, the district champion would be determined by district points. Using that system, it is impossible for Norman to win the district.

Even if the Tigers convincingly defeat Jenks next week, they cannot overcome the Trojans’ overwhelming lead in district points. Norman can, however, overtake Broken Arrow for second place.

Despite losing Friday, Muskogee still has a guaranteed playoff spot thanks to its one-point victory over Southmoore earlier in the season. The Roughers will finish the regular season against Sapulpa (3-5, 1-5).

Norman Tigers Put Up 70 Points in Blowout of Muskogee