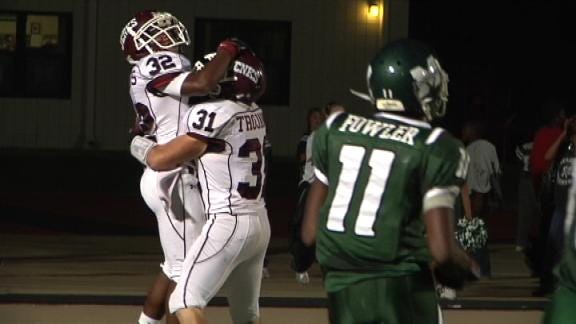 MUSKOGEE, Oklahoma – It only took star running back Zach Langer two rushes to crack the 100-yard rushing mark Friday night. The Jenks Trojans continued to roll through district play after a 62-14 road win over the Muskogee Roughers.

The Trojans didn’t waste any time against the Roughers. Calip Braden took the opening kickoff 96-yards for a touchdown. Jenks led 7-0 just 15 seconds into the game.

The Trojans forced a three-and-out and Langer dashed 61 yards into the endzone on Jenks’ first offensive play of the night. Jenks built a 14-point lead in just 2:01.

Muskogee struggled to move the football against the Trojans. They also hurt themselves on special teams. After an Alex Ross touchdown run gave Jenks a 21-0 cushion, the Roughers fumbled the ensuing kickoff. Jenks recovered and capitalized on the Muskogee mistake when senior quarterback Sawyer Kollmorgen faked out the defense with a play-action fake and out-raced the Roughers to the pylon.

Jenks led 28-0 before the whistle blew on the first quarter and cruised to its sixth win of the season.

Muskogee’s rough October continued after surrendering an early lead to Jenks. A week ago, the Roughers gave up 70 points to the Broken Arrow Tigers on the road.

Jenks (6-0/3-0) beat Muskogee at home 58-15 a season ago. The Trojans haven’t even had a close call against the Roughers since a 28-26 win back in 2005. They will put their perfect record on the line against Sapulpa at home next weekend.

Muskogee (3-3/1-2) will look to snap a two-game losing streak when they visit Shawnee.