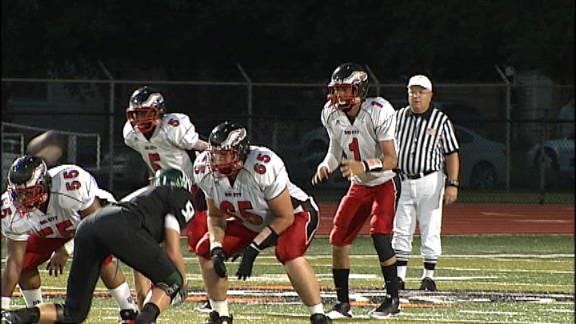 The Norman North secondary could not keep up with Del City’s receivers, and Gonzales consistently connected on long passes. He finished the game throwing for more than 400 yards and five touchdowns, four of which were on plays longer than 40 yards.

Gonzales’ first big play came in the second quarter, when Norman North cornerback Dave Ross tripped and allowed receiver Marquise Walters to get wide open. Walters made the catch and outran the remaining defenders for a 65-yard touchdown and a 7-0 lead.

After Gonzales threw a second touchdown pass to Greg Johnson, Johnson followed on the next drive with the play of the game. He caught a short screen pass and avoided six tacklers on his way down the field, eventually getting into the end zone for a 64-yard touchdown.

Minutes later, Gonzales connected on yet another long touchdown, this time a 43-yard strike to Walters. That score gave Gonzales more than 250 passing yards and four touchdowns in only 14 minutes of playing time, and gave the Eagles a 26-0 lead.

Norman North finally sustained a drive late in the first half, sparked by a huge run into the red zone. Raymond Demby put an exclamation point on the drive by running over two different tacklers for a four-yard touchdown. The first half ended with Del City up 26-7.

Del City scored another touchdown in the second half and added a two-point conversion after the kicker recovered a muffed hold and managed to get into the end zone. Shortly after, Norman North cut the lead to 34-14 when Emilio Gatewood broke a 51-yard run for a touchdown.

Gonzales added one more big play in the fourth quarter with a 58-yard touchdown pass for his fifth score of the day. He did not play on Del City’s final few drives.

The Eagles improved to 1-1 following a 35-13 loss to Midwest City to open the season. Norman North is now 0-2 after suffering a Week 1 upset by rival Norman. Del City will host Norman next week, while Norman North will face Westmoore.