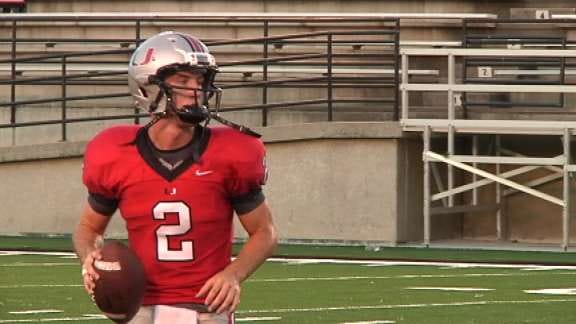 Now he’ll be the one throwing them.

"We feel like his experience level of playing receiver is going to help him out at the quarterback position," said Union coach Kirk Fridrich.

A great example of his playmaking ability came in last season’s 6A title game. Pearson sped down the sideline, returning a kick-off 90 yards for a touchdown in a win over Jenks.

Pearson was a fixture on special teams and at wide receiver, but also backed up Chase Boyce, who took Union to back-to-back state titles in two seasons as starter.

"I think that Kale is a lot like Chase,” Fridrich said. “I think maybe a little bit quicker at times but I don't think our offense will change a whole lot. Both guys are able to run and throw."

"It's a different outlook. I'm not knocking Chase Boyce, but Kale's got a little speed on him,” said senior tight end John Carradini. “He's quick, he's smart, there's definitely that threat. He can keep the ball and run with it if he so chooses."

Still, if Union wants to win a third straight 6A Gold Ball, they’ll have to do it with a new signal-caller.

PLAYOFFS: Won the 6A state title over Jenks

BEST PLAYER: Corbin Stall. He’ll anchor a defensive line that will face tough offensive lines in the first three games of the season.

BIGGEST GAME: The Redskins non-league schedule is absolutely loaded. They start off on the road with Louisiana powerhouse Evangel followed by games against 6A powers Jenks and Broken Arrow. Still, the Backyard Bowl can’t be topped – big crowd, big implications and the two teams that have won every 6A Gold Ball since 1996. After running through a three week stretch like that, the Redskins should have a very good idea with where they stand among not only the state’s, but the nation’s best.