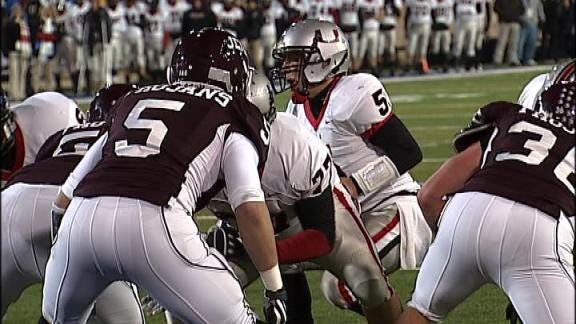 JENKS, Oklahoma -- It takes a lot to slow down Jenks linebacker Trent Martin. The incoming senior standout played the entire 2009 postseason with a broken leg, helping lead his team to another state title game appearance.

Jenks came up short in that game against Union, and Martin vows to right that wrong this season.

“Motivation-wise, there’s a lot of things I’m going to try to take out on offenses this year,” he smiled.

The leg cost him six weeks of the season. With Martin in the lineup, the Trojans stood strong, allowing just 11.75 points per game. After his injury, Jenks’ defense was never the same, giving up 24 points per game until Martin returned for the playoffs.

“The chances of playing Union made it just that much more important,” Martin said of his postseason return from injury. “I wasn’t going to miss the game.”

Making it back to that gold ball game will be tough to do with Martin less than full-strength in 2010. The sure-tackler is committed to play college football with some former Trojan teammates at the University of Tulsa, and wants to leave a legacy behind him at Jenks.

Role Model: His parents
Favorite Movie: Friday Night Lights or Remember the Titans
Favorite Food: “The Heisman” meal at Billy Sims BBQ
Favorite Video Game: Madden NFL
Listening to Right Now: Anything R&B, “but I’ve been listening to a little Kenny Chesney lately, which is not normal for me”