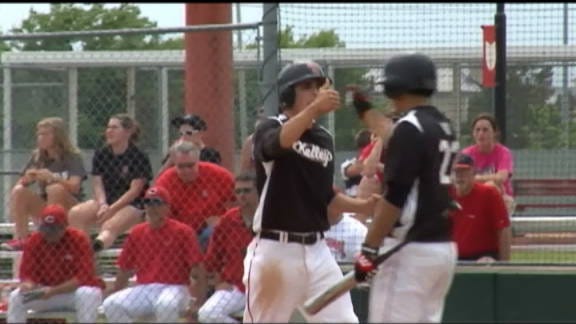 TULSA, Oklahoma -- The Bishop Kelley Comets continued their run at the Class 5A State title Wednesday after beating the Carl Albert Titans 8-6.

The Comets’ win was in jeopardy late in the game, when the Titans’ A.J. Wilson launched a two-run homer to tie the game in the top of the fifth 6-6.

Bishop Kelley answered back, taking advantage of Clark Roberts, who began to show signs of fatigue. He relieved the Titans’ Dakota Andrews in the bottom of the fourth, who gave up back-to-back doubles by the Comets’ Cameron O’Brien and Jake O’Brien, for two runs each. Carl Albert’s struggles on the mound continued against the hungry Comets who were looking to take the lead for the win.

Roberts opened the bottom of the fifth by walking pinch hitter Matt Fincher, who advanced to second on the next at-bat as Chris Rhodes was thrown out. Axel Johnson hit one to the Titans’ shortstop for a single, sending Fincher to third.

Donovan Walton singled deep to right field in the next at-bat for an RBI, as Fincher easily crossed the plate, regaining the lead for Bishop Kelley.

The Comets were able to score a second run after Cameron O’Brien hit a sacrifice fly to right field and secure the two-run advantage.