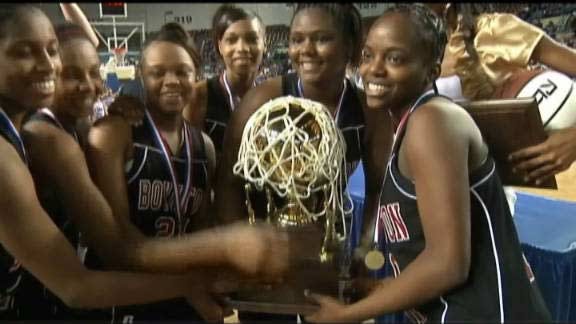 OKLAHOMA CITY -- In the opening game of State Championship Saturday, the Boynton-Moton Lady Cardinals upset No. 1 Cyril 54-48 to claim their first state title in school history.

It was a neck-and-neck contest through the first half of play, but the Lady Cardinals took control early in the second quarter. Sherri Lang opened up with a 3-point shot to extend the lead to 15-8, but Cyril would answer.

The Lady Pirates responded with a quick 5-2 run to pull within two points, and held Boyton-Moton without a field goal for the closing minutes of the half. The Lady Cardinals hit four free throws in the second to maintain their lead.

Shelbi Skaggs cleaned the boards and converted on the put back in the final seconds of the half to finish the half with eight and put Boyton-Moton back within two.

Cyril opened the second half with two straight baskets to take its first lead since the opening seconds of the game and rode a 6-2 run to take a 25-22 lead halfway through the third.

However, the fast paced Boyton-Moton offense could not stopped, and the Lady Cardinals reclaimed the lead, 27-25. Both teams traded baskets after that point and Boyton-Moton went into the fourth up 31-29.

“It’s all about timing and spacing,” said Lady Cardinal coach Shartese McHenry. “We know when to put it up and we know when to take it to the cup.”

The Lady Cardinals started the final quarter playing full-court press defense and pushing the pace to take a 40-30 lead off of a 9-2 run.

That wouldn’t be the end for the Lady Pirates, however, as they responded with a 9-4 run, orchestrated by Shelbie Laughlin, who scored three of nine and set up Mandee Potter for another two.

But Boyton-Moton depended on senior Sawonda Lang, who scored four of the Lady Cardinals final nine points and closed out the win.

Breanna Hutchinson led all scorers with 23, and hit three free throws in the closing minute to keep the Lady Cardinals on top.

“First I was not playing so well,” said Hutchinson. “But I knew I had to step up because we all wanted it that bad.”