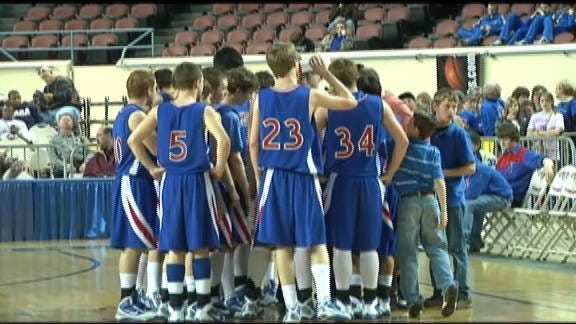 OKLAHOMA CITY – Red Oak’s Dwight Camp hit a jumper in the lane with nine seconds left to keep the Eagles’ championship hopes alive with a 47-46 win over Hammon Friday.

Camp’s game winner capped a second-half comeback and gave Red Oak its first lead after halftime. Hammon led by as much as seven points and had a chance to extend its advantage with late free throws.

With the game tied at 45, Hammon’s Salyer Roebuck made the first free throw in a 1-and-1 opportunity, but missed the second. After Camp’s shot put Red Oak ahead, Kolby Walker missed a 3-pointer as the buzzer sounded to seal the Eagles’ win.

Camp and Jordan Booth carried Red Oak from start to finish, accounting for 35 of the team’s 46 points. Camp finished with 20 and Booth scored 15, and they combined to provide the finishing touches on the Warriors’ comeback.

Booth tied the game with less than two minutes left in the game by hitting two free throws, which set up Roebuck’s attempts from the charity stripe.

Red Oak's bid for a repeat state championship will not get any easier. They will now face top-ranked Roff, which crushed Binger-Oney 49-26 in the semifinals Friday.

Rescuers Flock Together To Save 275 Parrots Stranded By Hurricane Ian