Caddo Surges Past Cheyenne into Semifinals 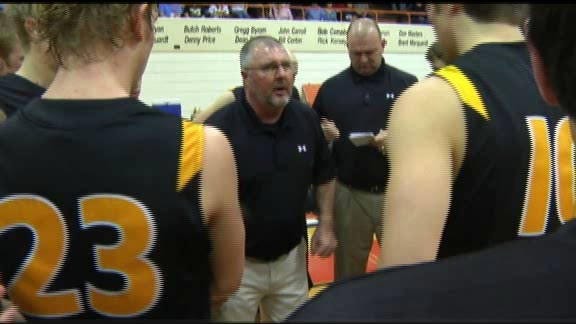 NORMAN, Oklahoma – The Caddo Bruins won a battle of one-loss teams 77-61 over Cheyenne Thursday to advance to the Class A semifinals.

The Bruins briefly trailed in the first quarter but recovered to hold a 16-10 lead at the end of the frame and never fell behind again. Caddo held a 15-point advantage at halftime, and never allowed Cheyenne to claw back within striking distance.

Two sophomores – Kolby Johnson and Konar Hall – led the offensive surge for the Bruins. Johnson finished with 22 points and Hall scored 21, accounting for more than half of Caddo’s points.

Dane Thrash carried Cheyenne all night, matching his season average by scoring a game-high 25 points. However, none of his teammates scored in double figures.

Caddo will play Okarche in the semifinals Friday, while Cheyenne’s season ends with a 27-2 record.

Caddo Surges Past Cheyenne into Semifinals