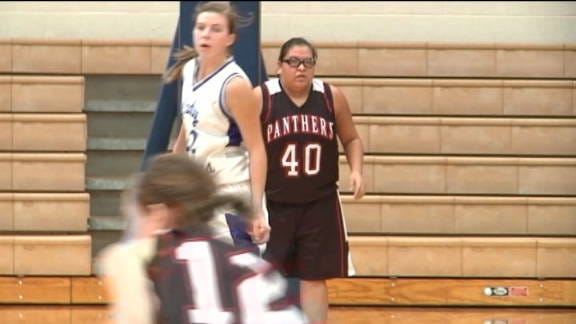 “I mainly just felt like I couldn't see,” Whiteshirt said.

“By Wednesday evening she was completely blind in her left eye,” Callison said. "One night removed from being her best on the court, off the court her body was at its worst."

“When I got to the hospital they made me take two MRIs and after that they sent me to take a CAT scan,” Whiteside said. “I guess that’s when they found out about the tumor in there.”

Then, just less than 24 hours later, she was in surgery.

“They went through the nose the sinus cavity but they said that wasn’t enough room so they cut under my lip and went through there,” Whiteshirt said. “They said it was a straight shot from the nose to where the tumor was.”

“The procedure went up through her nasal cavity,” Hunt said. “The mass the tumor was in the middle of her brain so they did have a direct shot to get it out but it was a four hour process it was very stressful a lot of prayers in our community a lot of prayers that day at the hospital that she would come out okay and everything be negative.”

Just a little over a month after her surgery, Johnna exceeded everyone's expectations, including her own and returned to her team to play in the district championship in her home gym.

“Your right there in the middle of the game and I didn’t sit her on the bench very long we tried to get her back in there she had a lot of rust,” Callison said. “That was the day she was released so she hadn’t done any running, anything like that so when she went in and how the crowd reacted you know that meant a lot to me and I know it meant a lot to her and her family.”

“It is a miracle,” Hunt said. “We believe God has his way of doing things miraculously and I think that’s truly what happened.”