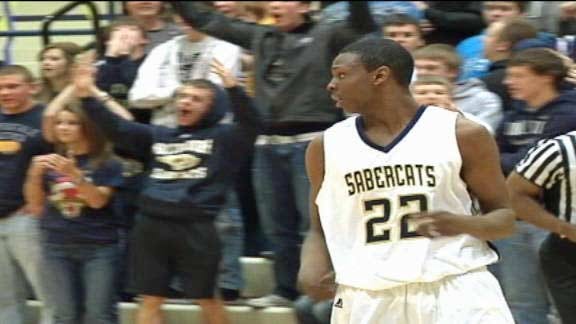 Lucas’ hot shooting started in the first quarter, where fans witnessed him score 10 of his points. He added an additional eight points by halftime. The Sabercats would post a six-point lead by halftime, 27-21.

Southmoore jumped out to a greater lead as the third quarter began, quickly putting up five more points. But Norman North recovered as the quarter went on and cut the lead to 41-39 at the end of the third quarter.

The Timberwolves took the lead for the first time in the second half after Dalton Mitchell hit a 3-pointer, putting Norman North up 44-43.

It was nip-and-tuck for the remainder of the game.

Norman North made a late-game push with just 16 seconds left on the clock when Dominic Porter hit a shot from behind the arch.

Timberwolves faced only a one-point deficit, 56-55, but a foul sent Southmoore’s Austin Haywood to the charity stripe, where he made both free throws, ending the game in the Sabercats’ favor, 58-55.