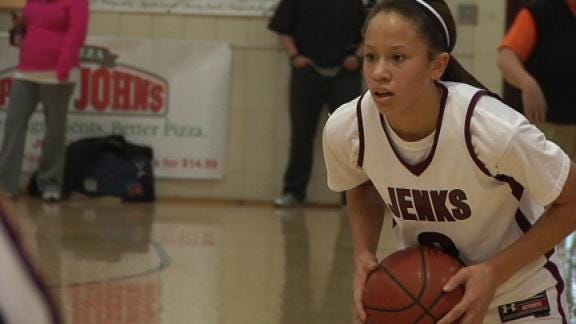 TULSA, Oklahoma – Despite scoring just four points in the fourth quarter, the Jenks Lady Trojans still found a way to top the Booker T. Washington Lady Hornets, 35-30 in Friday’s semifinal round of the Jenks/Union 2010 Invitational.

Tied at 15 to start the third quarter, Jenks kicked off the quarter on a 9-0 run. The Lady Hornets battled back. Kaylan Mayberry cut the lead down to seven, but Jessica Washington’s three-pointer to beat the buzzer gave Jenks a 31-21 advantage heading into the fourth quarter.

Booker T. Washington played great defense in the final eight minutes to cut the Lady Trojans’ lead to three points with 14 seconds to play, but Kamri Anderson’s desperation heave didn’t connect, and Jenks advanced to the title game of their own tournament.

Washington led all scorers with 16 points in the game, a trio of three-pointers. Heidi Greeson scored nine points for Jenks.