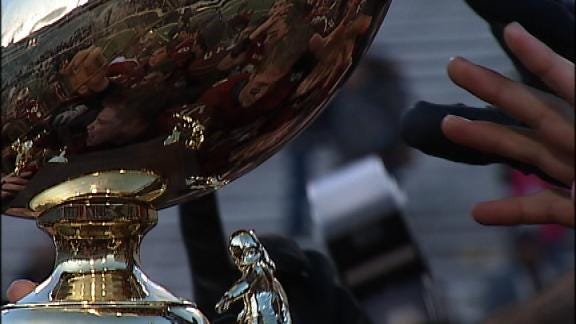 STILLWATER, Oklahoma – In only their second season in the OSSAA, the Lincoln Christian Bulldogs won a 2A state football championship. Head Coach Darren Melton couldn’t hide his smile, even after getting a bucket of ice water dumped on his back after his Bulldogs’ ran out the clock.

The Bulldogs topped the Kingfisher Yellowjackets 35-0 Saturday afternoon at Boone Pickens Stadium. Lincoln Christian started fast, intercepting Yellowjackets’ quarterback Derek Patterson on the first play of the game, returning it for a score.

The champs picked up more momentum on a second quarter 70-yard punt return from Roman Wilson. The return marked the first time the Bulldogs had returned a kick for a score all season.

Just before halftime, Patterson was hit late and slammed into the bench on the Lincoln Christian sideline. Medical staff at the stadium tended to the Kingfisher quarterback for nearly 20 minutes before he was taken to a hospital on a stretcher. After their leader left the game, the Yellowjackets’ played with little life. The Bulldogs scored twice on the ground in the second half to seal the win.

Lincoln’s ride to a title picked up steam after downing Adair and Beggs in the first two rounds. Davis gave Lincoln Christian a tight game in round three, falling on a last-second field goal from Wilson. The Bulldogs shut out their final two opponents from the season. They outscored five teams in the playoffs by a total of 185-24.

The Bulldogs finish the season with a 14-1 record, three playoff shutouts, and one gold ball.