Local Players in the NFL: Week 10 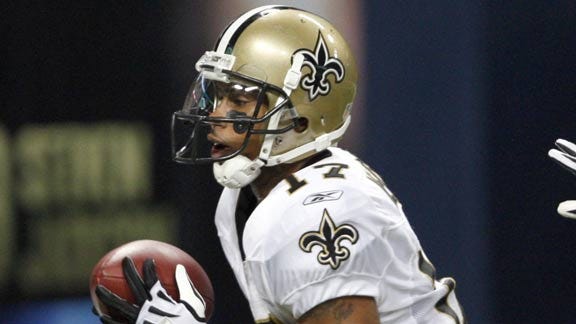 Ada
Jeremy Shockey had three receptions for 42 yards in New Orleans’ 28-23 win at St. Louis. The former Ada Cougar has 444 yards receiving and three touchdowns this season and 5155 yards in his career.

Booker T. Washington
Robert Meachem caught a 27-yard touchdown pass and had a 41-yard run in the Saints’ 28-23 win over the Rams. Meachem has 323 yards receiving and four touchdowns this year.

Mark Anderson had one tackle in Chicago’s 10-6 loss to 49ers. Anderson has 15 tackles this season and 92 in his career.

Foyil
Josh Brown made a 32-yard field goal and two extra points in the Rams’ 28-23 loss to the Saints. Brown has not missed a field goal in his last five games is now 8 of 11 on the season.

Sallisaw
Derek Fine had one reception for eight yards in Buffalo’s 41-17 loss to Tennessee. The former Black Diamond has 9 receptions for 64 yards this year.

Kingfisher
Curtis Lofton had six tackles in Atlanta’s 28-19 loss to Carolina. With his effort, Lofton has 90 tackles in 2009 and 184 in his career.

Westmoore
Billy Bajema had one reception for 12 yards and returned a kickoff for 14 yards in the Rams’ 28-23 home loss to New Orleans. Bajema now has three catches for 55 yards in 2009.

Local Players in the NFL: Week 10