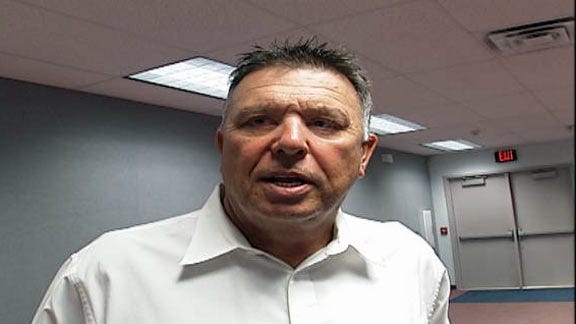 In the two-and-a-half hour meeting,Autry was represented by a lawyer and answered questions by the board about the allegations. The executive session, which was open to the public, had about 40 people in attendance. Following the meeting, Autry said he was elated about the amount of support he received.

“I appreciate the people,” Autry said. “I’m indebted to them, overwhelmed by them.”

A freshman football player reported that he was sexually assaulted during a hazing ritual. The teen’s mother attended the board meeting and said the hazing is well-known throughout the community.

“I’ve never been so outcast as my son being the victim here,” said the teen’s mother, Dianna Littrell. “He was victimized in the locker room and now he’s being victimized to the community.”

The teen claimed two juniors on the team were responsible for the attack, which happened on school grounds.

Following the board’s ruling, members of Autry’s team lined up to welcome him back. The coach missed last week’s game due to the investigation, and the team was forced to play without their leader.

Both players have been suspended for their involvement in the incident. One playeris gone for theremainder of the academic year, and theotheris suspended for three days and one football game.

No charges have been filed. The teen’s mother said she’s appalled by the ruling andshe'snot finished defending her son.