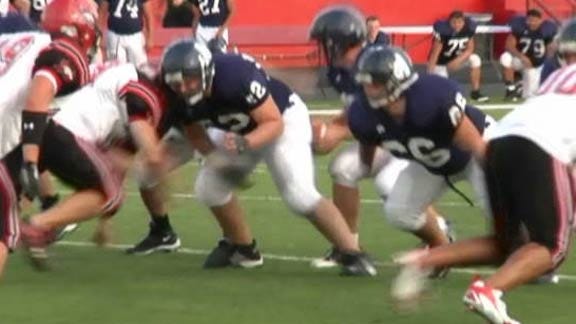 ALTUS, Oklahoma -- Altus Bulldog fans were on edge Friday night, when senior quarterback Austin Beisel was taken off the field on a stretcher with just 29 seconds left on the clock.

Altus (1-2) was down by one against the Lawton Wolverines (3-0) with around 30 seconds left of play.

Beisel had a miscue with a running back and consequently fumbled the ball. The quarterback, noted by Head Coach Lyn Hepner as “hard-nosed” and tough, dove for the loose ball, colliding with a group of Wolverine defenders.

“We have a scare anytime it involves the neck and (a player) says there’s pain,” Coach Hepner said.

Moments after the hit, medical staff ran onto the field to check of Beisel, who was complaining of a burning sensation in his back.

As a precaution, Orthopedic Surgeon Dr. John Gallagher, the team’s sports physician on call, recommended Beisel be taken to the emergency room.

“It was a precautionary deal against a possible neck injury,” the Bulldog Head Coach said.

The remainder of the game ticked away as Altus fell to Lawton, 15-14. Meanwhile, after a thorough check by doctors, the Bulldogs’ quarterback was cleared and returned to the field house.

“He walked into the locker room later that night after the emergency room and got his stuff,” Coach Hepner said. “We talked and he’s fine. He’s a little sore, but that was the football game.”

Austin Beisel has since returned to practice and is expected to lead the Bulldogs next Friday night, as they face the undefeated El Reno Indians.