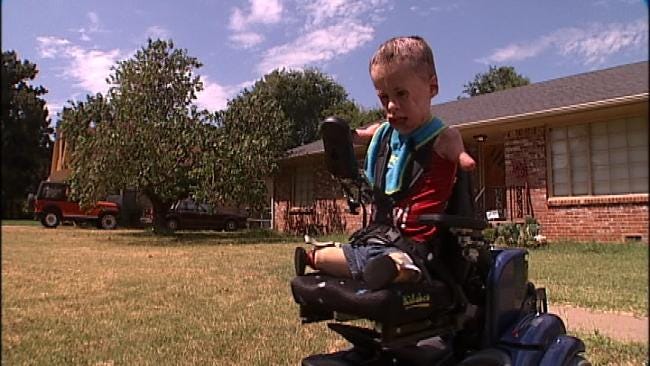 TULSA, Oklahoma -- A young meningitis survivor is able to move around a little faster now.

The 7-year-old's new wheels can do just about anything, raise up or down and move forwards or backwards, even fast or slow.

It seems each time we check in with him we find a little boy who's just like every other elementary school kid.

There's one thing you can say about Jeremiah Mitchell and his new ride; they're hard to keep up with.

You could almost call it a motorized sense of freedom loaded with cool gadgets.

He couldn't resist showing us how easy it is to load into his van.  His mom says it took him no time at all to learn how to make it go.

"Just like that," said Machaela Mitchell, Jeremiah's mother. "Go out for one ride and now we're driving."

Jeremiah was one of seven Oologah students to contract bacterial meningitis in March 2010.  The disease killed two of his classmates, Shuache Moua and Andrew Thomas.

Jeremiah had his arms and legs amputated and much of his face has been rebuilt.  His mother says he still needs at least two more surgeries to repair his bottom lip.

Jeremiah's mother says he's made great progress, but still has a long way to go.  "His health is really good. It's, of course, going to be a lot of process, a lot of years."

Progress is certainly visible.  Jeremiah now has his prosthetics legs, called stubby's.  And you can see he has no trouble getting around.

He's about ready to get his prosthetics arms, they're still in the shop.

Machaela Mitchell says her son is looking forward to using them.  "He's ready for his arms, he wants to be able to grab things."

Jeremiah has certainly grabbed a hold of life.  There's seems to be no quit in him, especially when he's hamming it up for the TV camera.

Jeremiah will graduate to a larger set of prosthetic legs as soon as he can learn to operate the ones he has right now in different situations such as pulling himself up without a wall to help.

He's scheduled to go back to the Shriners Hospital in Cincinnati for a check-up next month.