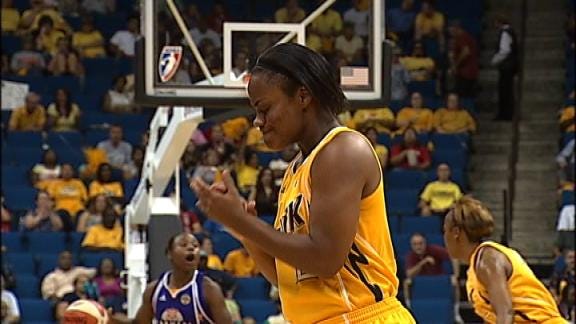 CHICAGO – The Tulsa Shock suffered its seventh straight loss of the season Wednesday falling to the Chicago Sky 72-54.

The Shock simply got out to a horrible start and could never recover.

In the first 5:07 of the game, Tulsa had six turnovers, five fouls and missed five field goals to fall behind Chicago 12-5. Also during those first five minutes, Shock center Liz Cambage had to take a early rest due to four personal fouls.

By the end of the first quarter the Shock was behind 21-9 and as a team Tulsa had committed eight turnovers.

Those turnovers would hinder the Shock the rest of the game as they committed 25 in the contest while Chicago committed 19.

At the half, Tulsa trailed 43-31. The Shock cut the lead to seven and actually outscored Chicago in the third, but for the rest of the game, the Sky capitalized on Tulsa's turnovers and missed shots and would only increase their lead as the game clock ticked down.

The Sky was led by Sylvia Fowles who netted 21 points and 13 rebounds and two steals.

As a team, Chicago shot 48.5 percent from the field to boost the team record to 7-7 on the year.

The Shock will return to action on the home court Friday hosting Los Angeles at 7 p.m.