The Heat Goes On! 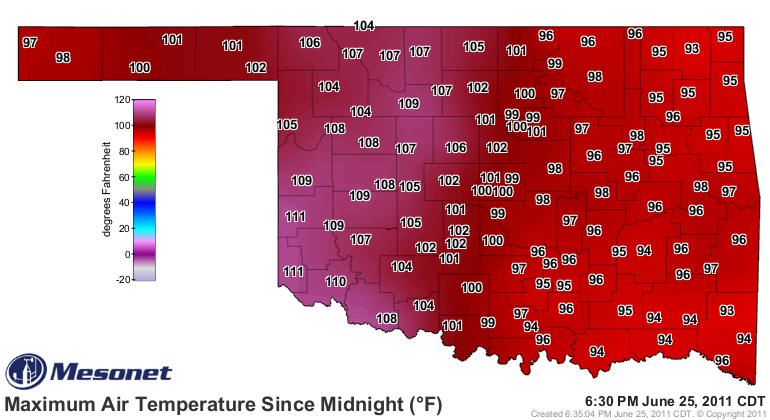 So, is there any relief in sight for either the drought or the heat? In terms of a widespread, generous rainfall event…..NO, not anytime soon. But, there is hope for at least a few showers and storms later tonight for the more eastern counties and into the morning hours of Sunday. There is another chance of showers and storms Monday night through the day Tuesday which should also provide at least a brief break in the extreme heat….for at least some of us.

For tonight, there are still indications of a complex of storms to form in E KS or W Mo during the overnight hours which would then be dropping to the S and SE. These would most likely affect areas east of Hwy 75 and would have the potential to become marginally severe with winds over 60 mph and hail up the size of quarters. They would also bring some brief, but locally heavy rainfall for some locations. Those storms will be long gone for much of the day on Sunday and with gusty southerly winds returning, look for daytime highs to be back into the mid-upper 90s if not near 100. If some locations do get some generous rainfall from any storms that form, then that rain footprint would hold temperatures down a few degrees, but the extra humidity would probably make up for it. In other words, look for heat index values to be at or above 100 and possibly near the dangerous 105 level for Sunday afternoon at most locations.

Monday is expected to be hotter yet with a SW wind in advance of an approaching, weak frontal boundary. Those SW winds and mostly sunny skies should push temperatures to near triple digits along with heat index values over 100. The actual boundary is expected to be moving across the state Monday afternoon and night and will also bring a better chance of showers/storms for much of the state before it is all said and done. Right now, will keep the chances at the 30% level for Monday night and into the day Tuesday and some of those will have a severe potential as well. Behind the boundary, our winds will be more from the E to NE which together with any rain footprint and more cloud cover should hold daytime temperatures into the lower 90s.

Any potential rain footprint will also complicate the temperature forecast for the rest of the week as well. Right now, it appears that ridging aloft will re-assert itself keeping any additional threat of rain in the slim to none category through the coming weekend. As a result we are expecting temperatures to be pushing triple digits again before the week is out….unless, we get more rain on Tuesday than is now anticipated.

Beyond that, is there any relief in sight? Well, there is a glimmer of hope during the following week, but will wait to see if there is better consistency in the longer range guidance before placing too much stock in those solutions.

The Heat Goes On!