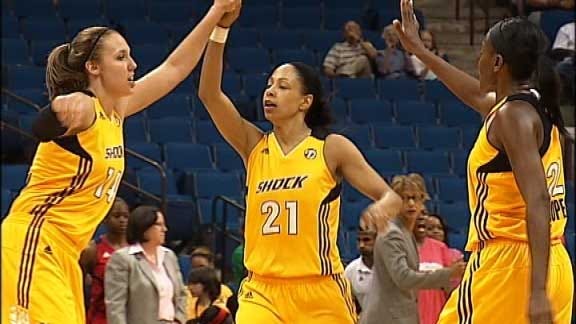 TULSA, Oklahoma -- After starting the season 0-5, the Tulsa Shock notched their first win of the season Saturday with a 77-59 win over the Washington Mystics, thanks to a strong third quarter performance.

Trailing 32-26 at the start of the second half, Tulsa rattled off a 15-2 run – including eight from Ivory Latta – to take a 41-35 advantage with six minutes left to play in the third quarter. The Mystics closed the deficit to one point in the closing minutes of the third quarter, but that's when Elizabeth Cambage took over.

The rookie center rattled off two consecutive three-point plays, to put Tulsa up seven points with 37 seconds left to play. Washington's Karima Christmas hit a pair of free throws in the quarter's closing seconds to cut the deficit to 55-50 heading into the game's closing 10 minutes.

Tulsa led by four points with eight minutes left on the clock, but finished the game outscoring the Mystics 20-6 to earn their first win of the season.

Latta finished with a game-high 22 points, including 12 from behind the arc, while rookie Kayla Pedersen scored 12, grabbed seven rebounds and dished out seven assists in the win. Veteran Sheryl Swoopes contributed 12 points and six boards, while Cambage scored 10 points coming off of the bench.

The Shock will try for its second win at 7 p.m. Tuesday against the Seattle Storm.