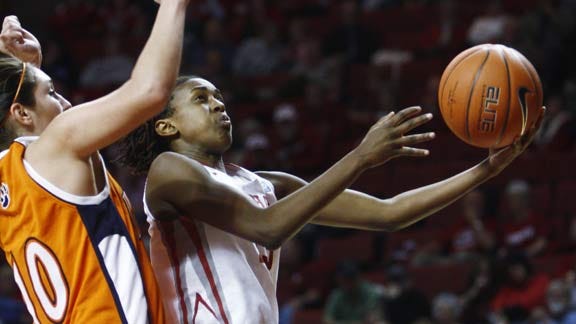 BRISTOL, Connecticut -- Former Oklahoma Sooner star Danielle Robinson was selected sixth in the 2011 WNBA Draft Monday by the San Antonio Silver Stars, one selection before the Tulsa Shock were set to make their second selection.

The two-time All-American led the Sooners to a Regional Final of the NCAA Tournament in her senior season, averaging 18.3 points, 5.1 assists and 2.5 steals per contest in 2011 – all team highs.

A season ago, the Silver Stars had no shortage of offense, with four players averaging double-digit scoring totals in the regular season and add yet another consistent scoring threat with Robinson. Despite the high-scoring offense, San Antonio was swept in the first round of the WBNA Playoffs by the Phoenix Mercury.

The Silver Stars open the 2011 preseason against the Connecticut Sun May 25, before opening hosting the Tulsa Shock to start the regular season at 7 p.m. June 4.