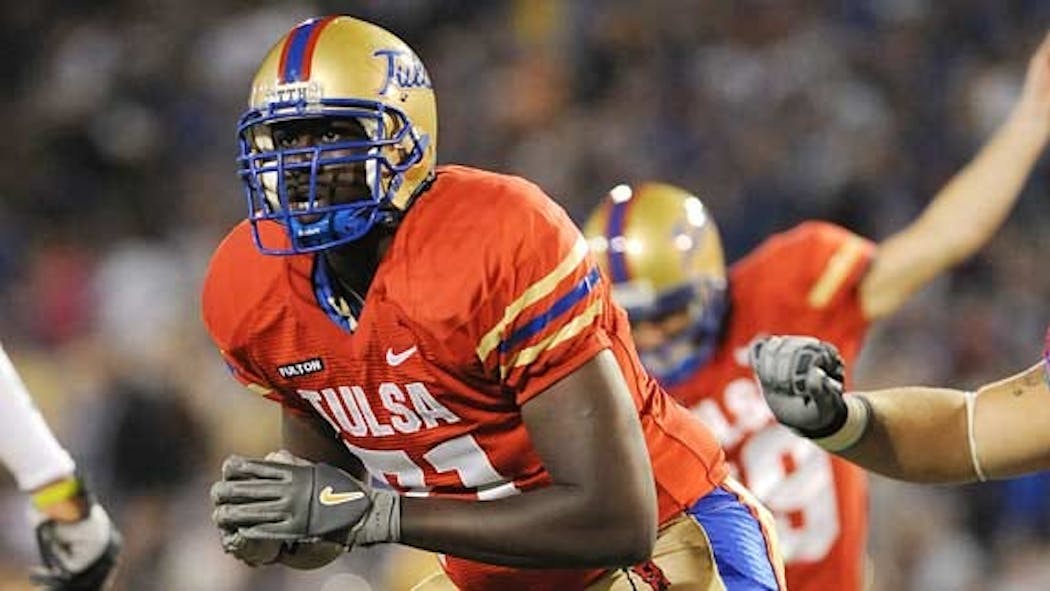 OKLAHOMA CITY -- Football fans across the state are mourning the loss of Wilson Holloway, who died Wednesday after battling Hodgkins Lymphoma, according to Oklahoma Christian's headmaster Dallas Caldwell. First diagnosed in the spring of 2008, Holloway continued to fight his disease with courage and focus.

“We’ve got good people around us, trying to bring us back up,” Wilson's bother, Wesley Holloway, said. “It’s a hard time for our family right now.”

Wilson Holloway was one of those players.

He made a name for himself in high school, playing on varsity for Oklahoma Christian, starting for the Saints in his junior and senior seasons. His teammates and coaches watched and cheered for him as he made the transition to college ball, signing with the Tulsa Golden Hurricane.

He red-shirted his freshman year, but was eager to prove himself in his second year. In the spring of 2008, Holloway’s coaches noticed he was struggling through drills, unable to catch his breath. It was uncharacteristic of the offensive lineman, who always played at his highest level.

A doctor’s appointment was scheduled and the findings changed the 19-year-old’s life forever.

A softball-sized tumor was putting pressure on his lungs, explaining his difficulty of breathing. After a string of chemotherapy treatments, though, it looked like the sophomore could return to his passion -- football.

“My brother was unbeatable,” Wesley said. “He could keep your spirits up, his spirits were never low.”

Holloway played in six of the Golden Hurricane’s games before recognizing a red flag. His lymph nodes were swollen, meaning his cancer could have returned. Another trip to the doctors confirmed his fears and once again the young man was facing a series of treatments.

His courage during those times was recognized not only by his family, teammates, professors and friends. He was honored with the 2008 FedEx Orange Bowl Courage Award, given to an athlete who overcomes a hardship with courage, and nominated for the Uplifting Athletes Second Annual Rare Disease Champion Award.

Wilson was again cleared by his doctors following his treatments and was ready to return to a normal life. He focused his sights again on the sport he loved, regaining the weight he lost and working toward returning to the football field.

In the March of 2009, he suffered another blow. His cancer had again returned, and this time his medical team advised radiation in addition to his chemo. He painstakingly endured another series of treatments, adamant to beat the cancer.

Throughout his treatments and remission, Holloway received support from those around him. Oklahoma Christian’s basketball team honored him just last week during their senior night, donning t-shirts that read, “Keep on Smiling” in support of his recovery and recognizing him during halftime. His family and friends were praying for him as he entered the Intensive Care Unit Monday at the OU Medical Center in Oklahoma City. Everyone he touched will now mourn the loss of the young man, who passed away after his long, strenuous battle.

While the Holloway's family remembers a brother and a son, Wesley said they'll remember the strong spirit Wilson had throughout his battle.

“Always had a smile. (He) never let the smile go.” Wesley said. “That was his motto throughout, ‘They can’t take my smile away from me.’”

University of Tulsa Athletic Director Bubba Cunningham expressed the sentiments of the Golden Hurricane in this statement:

“We are deeply saddened today by the tragic loss of Wilson Holloway after his tireless and relentless battle with hodgkins lymphoma. We extend our sincere thoughts and prayers to his family, friends and teammates in this time of sorrow.”

Cunningham went on to explain Holloway’s impact on campus.

“In his four years at The University of Tulsa, Wilson’s smile was contagious to those who ever met him,” Cunningham said. “He fought the disease with a tireless and enthusiastic spirit. We’ll never forget Wilson’s own words ‘I don’t take things for granted anymore. There are days I wish I could go out and do the drills everyone hates to do.’ Wilson Holloway has touched all of our hearts with his passion for living.”

He’ll be remembered not only for his work ethic in football, but for his courage off the field.

UPDATE: The student body of Oklahoma Christian School has organized a memorial candlelight vigil, scheduled for Friday, Feb. 18 at 6 p.m. The service will be held at OCS, locating in Edmond on 2nd and Interstate 35. The students have created a Facebook page for the Wilson Holloway Memorial Candlelight Service, asking attendees to bring candles, pictures and flowers to honor Wilson.

Funeral services for Wilson Holloway will be held at the Memorial Road Church of Christ in Edmond at 1 p.m. on Feb. 21.