Who Do You Pick: KD or Blake? 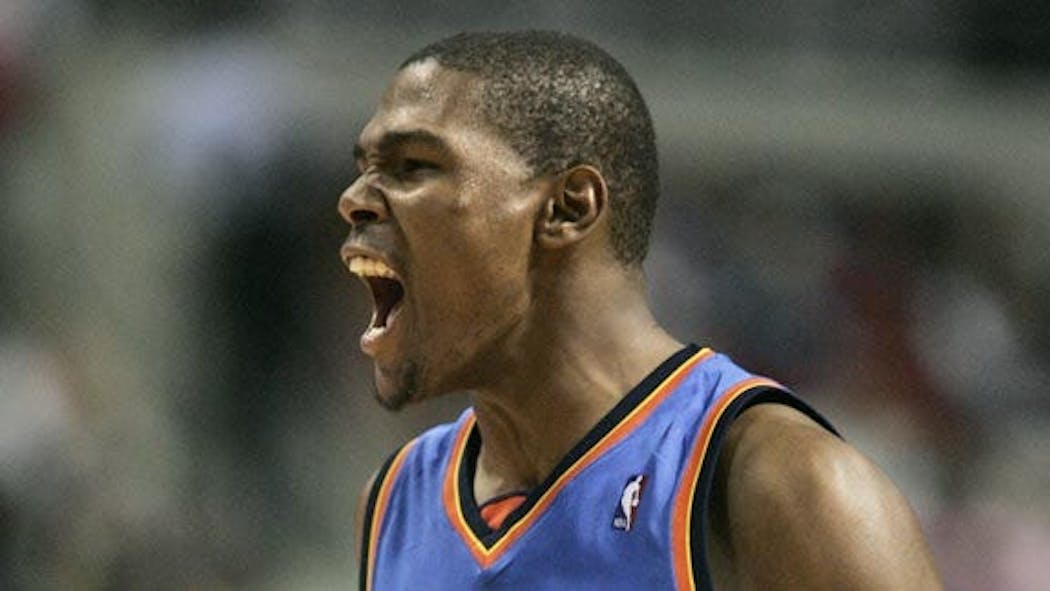 TULSA, Oklahoma -- Pretend for a minute that you are at a company barbeque at the local park. You’ve had your fill of burgers and dogs and then, out of nowhere, the jerk that sits in the cubicle next to yours issues a challenge: a game of hoops over on the blacktop.

Keep in mind, this is the same annoying guy who sits next to you every day. The same guy who only takes a break from bragging about his kids making the honor roll to gloat about his wife’s blue-ribbon winning cherry pie that EVERYONE just raved about over at the picnic tables. Yeah, nobody ate your wife’s apple pie – the one that required you going to the store for apples and sugar at 11 p.m. the night before while you were trying to watch the biggest college hoops game of the year that you DVR'ed from earlier.

This is your shot at revenge! You can rub his nose in YOUR success for a change!

The problem is, this dude is a virtual black belt in hoops. He, not surprisingly, played a little ball back in college. Of course he averaged a double-double and dated all the hot chicks, while you crammed for economics tests and fixed calculators for fun.

Obviously, you want to cream this guy.

Low and behold, you get over to the court and two guys are already there shooting around. Even from far away you can tell, these guys are tall? and good!

You and the guys from the BBQ make it to the court and jaws drop – it’s Kevin Durant and Blake Griffin! What great news! You already decided while walking over that you and the jerk would both be captains, and through a lucky ‘rock beats scissors’ guess, you got first pick.

So, who do you take?

You HAVE to beat this guy. And you KNOW that whoever you pick, KD or Blake, that jerk will automatically take the other one.

So, again, who do you take with your first pick?

It’s a tough one to call. Living in Oklahoma and seeing KD carve up the Western Conference on a nightly basis, it’d be easy to take the Thunder star No. 1 overall in the pick-up game to end all pick-up games. He can hit from anywhere on the court, or just blow by you on the way to a rim-rockin’ slam. Plus, he’s 6-foot-9?.a full foot taller than pretty much everybody else from your office.

But, living in Oklahoma, you also remember how monstrous Blake was with the Sooners. You have to have been living under a rock the past few months to have missed what he’s doing out in Los Angeles with the Clippers. He’s a one-man highlight machine. He's second in the league in double-doubles and can dunk on a giraffe.

There are pros and cons to taking each guy. (Not many cons, by the way.)

If I am in need of a win THAT badly, and my reputation as a man?plus status at work?depends on a ‘W’ THAT greatly, I have no choice but to go with??

I know. It was hard. I went back and forth. Durant can hit 3’s and can handle the ball well. He can distribute and rebound and is a great leader.

But, who in this world can guard Blake Griffin?! He’s a mountain of a man who can handle the ball pretty well for a guy his size. He can rebound better than just about anyone in the NBA. He is already one of the best dunkers in the league and, face it, if those two have to guard each other, Griffin can just body-up Durant and push his smaller body around.

Griffin is my choice. It’s a one-time thing. If we were playing company basketball games every weekend until the end of time, maybe Durant is the better choice. He’s already proven that he’s pretty durable and makes people around him better. But this is a one-time, winner take all, rub that jerk from the adjoining cubicle’s nose in it battle so I’m taking Griffin.

Disagree? Who would you take? Leave your pick in our comments section at the bottom of the page.