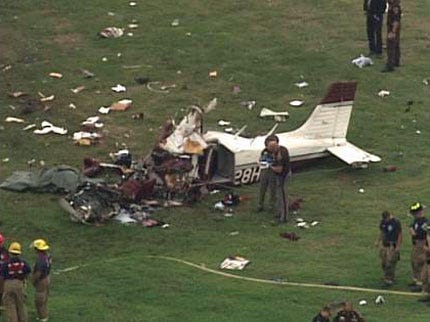 TULSA, OK -- The National Transportation Safety Board has released its preliminary report on a plane crash that killed five people in Tulsa on Saturday.

Family and friends say the pilot and his passengers were heading to Dallas to watch the OU-BYU football game Saturday night.

According to the report, the single-engine Piper Saratoga struck a guy-wire supporting a 600-foot-tall radio tower in the center of Chandler Park in West Tulsa.

The report says the aircraft struck the cable about 50 feet below its attachment point, which was approximately 150 feet up from the ground.

Investigators found a 300-foot-long section of the cable with the main wreckage of the airplane, which was about 1,500 feet from the tower.

According to the NTSB report, the main wreckage was located almost a hundred yards from the initial impact on the ground.

The report says the flight took off at about 10:35 a.m. from Jones Riverside Airport on its way to Dallas Love Field.

Investigators say the wind at the airport when the flight left was out of the northeast at about 7 miles per hour, indicating the pilot would have taken off to the north before turning south to head to Dallas.

According to the report, the plane left a 9-foot-long gouge in the ground at a heading of 276 degrees, which would suggest the aircraft was heading almost due west at impact.

Investigators say the wreckage has been moved to a secure storage facility and that the engine was set aside for further examination.  They will try to determine if the engine was running when the plane impacted the cable and then the ground, and if so, if it was running at full power.

The NTSB's preliminary crash reports do not contain any speculation or conclusions about what caused the crash.

Those will be contained in subsequent reports which usually take many months to complete.