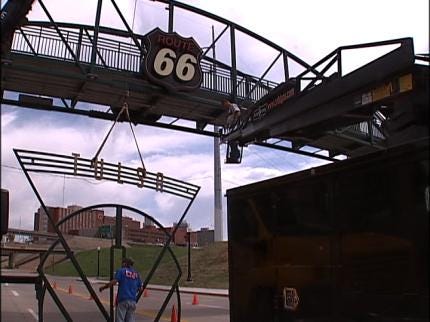 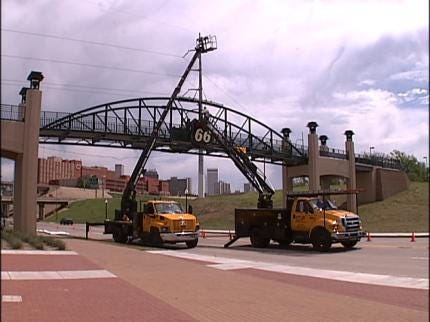 TULSA, OK -- Some icons of Route 66 have been restored at the Cyrus Avery Plaza.

The symbols were installed on a bridge over the highway last fall and promptly vandalized.

Now they're repaired and back overhead.

It took months to redesign and rebuild the Route 66 shields for the Pedestrian Bridge.

A crane blocked traffic on 11th Street -- the old Route 66 -- so the new pieces could be lifted into place.

Claude Neon Federal rebuilt the signs and installed new decorative barriers to keep them out of reach of vandals.

"Originally the Tulsa name was part of the sign, and it was taken off for cost considerations, and so we've been able to put it back as this part of the project," said Ed Horkey with Claude Neon Federal.

Vandals damaged the signs last year, only a week after they were installed. That sent designer Steve Vogt with PSA Dewberry back to the drawing board to come up with a way to protect them.

It would have been easy to come up with an indestructible but unattractive design. The challenge was to come up with something to protect the signs that looked like part of the original design.

"You never can build a complete barrier because it's just a challenge to see if they can beat it, but we made it a little bit harder," Vogt said. "Some of the critical components aren't quite so accessible."

The new barriers protect the signs and make them more visible to drivers during the day.

At night, the designer says the barriers will practically disappear.

The signs really stand out at night, when they will be lit up again.

Maybe this time vandals won't tear down what the city is trying to build up.