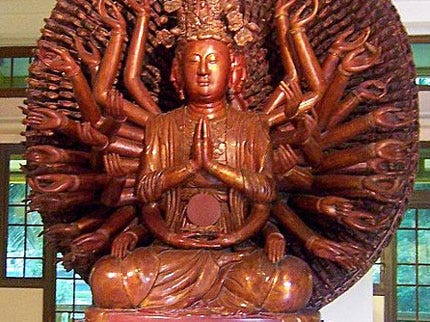 TULSA, Okla. (AP) -- The Tam-Bao Buddhist Temple in Tulsa is planning to build a 49-foot-tall granite statue of the Buddhist goddess Quan Am.

The statue would stand on an 8-foot foundation and would be 57 feet tall -- or about 3 feet shorter than the landmark praying hands statue at Oral Roberts University in Tulsa.

Temple officials say they want to attract people who are interested in Buddhism and believe the statue will also beautify the city.

Quan Am is considered the embodiment of compassionate love and kindness.