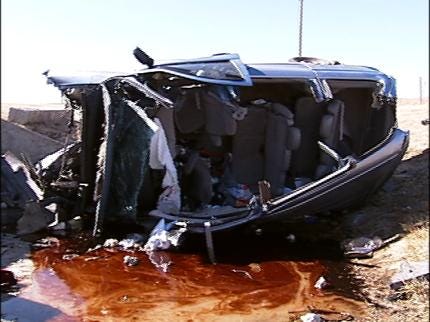 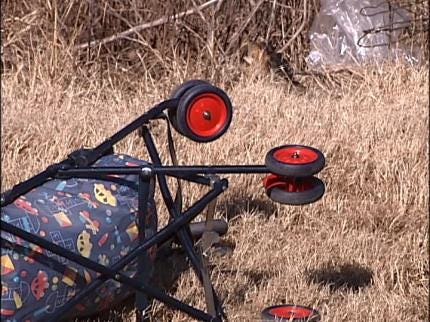 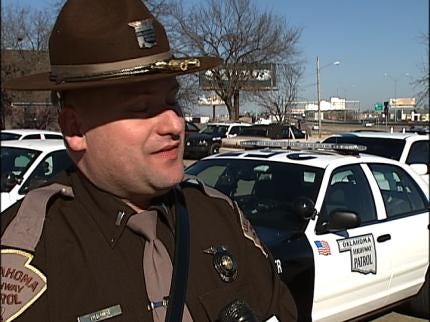 SKIATOOK, OK -- A northeast Oklahoma family is hoping for the best after a weekend accident injured everyone in their car, including three young children.

There isn't much left of the Reed family's minivan after a Saturday crash.  Their van ran off the road, just after noon, along Highway 20 just west of Highway 75.

"Upon our arrival, we found that the vehicle had for some unknown reason, gone off the side of the roadway, struck a concrete culvert and overturned one quarter of a time," said Oklahoma Highway Patrol Lt. George Brown.

The Oklahoma Highway Patrol says Jeremy and Chrystal Reed and their three children were in the van when it suddenly lost control.

"This was a bad wreck, and we do respond to many wrecks, but this one will stick out for years to come because children were involved," said Oklahoma Highway Patrol Lt. George Brown.

The couple's seven-month-old son was treated for minor injuries and released.  A four-year-old son suffered a bruised liver and broken ribs, but has been released.   Their five-year-old son sustained the most serious injuries with possible damage to his spinal cord, but he has had some movement in his legs.

The parents have multiple broken bones.  The driver, Jeremy Reed, says he doesn't remember the crash, but has had seizures in the past.

Investigators are still trying to figure out what caused the crash, but say the van was likely going too fast.

"The speed limit out there is 65 miles per hour and definitely from the impact and from crush investigation on the vehicle we're looking at a speed in excess of that, possibly up to 80 miles an hour," said Oklahoma Highway Patrol Lt. George Brown.

The OHP says all three children were in child restraints.

The family told The News On 6 they plan to set up a fund at RCB Bank in Skiatook to help offset medical costs.  It should be ready within the next day or two.