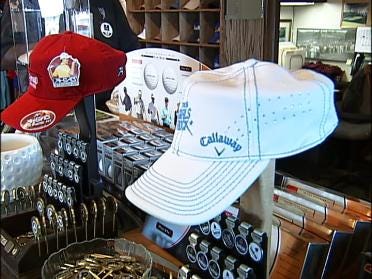 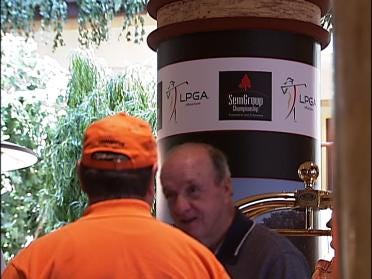 It's just hours from the first tee time at the SemGroup Championship at Cedar Ridge Country Club. Hundreds of fans lined the course on Wednesday to watch the Pro-Am event. The News On 6's Jeffrey Smith reports course officials say this week could be the busiest they've ever seen.

The LPGA tournament tees off early Thursday morning. But already tens of thousands of fans from all over the country have made their way to Tulsa. And because of that, professional golfers aren't the only ones focusing on the green.

Local businesses have green on their mind as well.

"If the weather's there, it'll be a record year, for sure," said Cedar Ridge Manager Cleve Stubblefield.

For the first time, the tournament will last for four days.

"Bigger tournament, four rounds. I think people are getting excited about it in town. This year, we're expecting quite a big crowd, much bigger than last year," said Golf Pro Rory Scrymgeour.

Seventy thousand people showed up last year to watch the tournament. But this year, with a bigger purse, better field and an extra day of competition, officials at Cedar Ridge hope 90,000 people or more will come out to watch the event.

"We have all the top 10 here, so we're very excited," said Stubblefield. "There's lots of activity on 71st as far as restaurants are concerned."

"It's a great impact for us. We see anywhere from 25 to 30% growth over an average week," said Brad Earnest of Fox and Hound Grill.

Earnest manages one of the restaurants along 71st Street, just minutes from the course.

"We've had people in already from other parts of Oklahoma, as well as people from Missouri, Kansas, and Texas just in the past two days," said Earnest.

Local hotels are booked up too. Tulsa's Renaissance Hotel has been at capacity all week.

"People started showing up early this weekend that have been coming in already for a couple of days, saying they're here for the tournament," said Earnest.

Whether it's the $20 spectator pass, a souvenir hat or just catching the action at the local pub, the LPGA is coloring Green Country green

The Tulsa Visitors Bureau estimates that spectators will spend $12 million this weekend all because of the LPGA tournament.

Golf pros are thrilled about record ticket sales, but they've been watching the radar screens and they say the revenue they bring in will depend on how long the warm weather lasts.