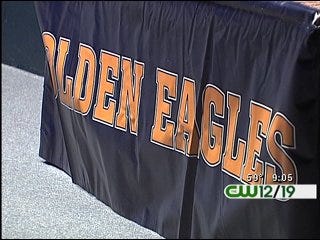 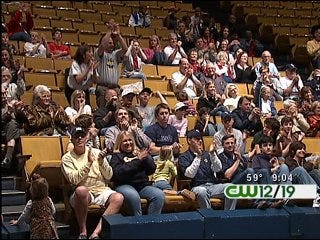 The ORU Golden Eagles now know who, and where, they will play when the NCAA Basketball Tournament tips off this week.  The pairings for March Madness were announced earlier on Sunday evening.  The News On 6's Chris Wright reports the Eagles have landed, in Denver.

They are the 13th seed in the South Regional, and will take on the 4th seeded University of Pittsburgh Panthers on Thursday.

It's a match-up many fans say they will travel to Colorado to see.

Golden Eagles fans filed into the Mabee Center on Sunday, and then anxiously waited for the anticipated announcement.  Half-an-hour into the selection show, ORU finally learned its fate.

After winning the Summit League, the Eagles earned a date in Denver with Big East power Pitt.  ORU will be a decided underdog, but its cheerleaders have embraced that role.

"We'll be the underdog, but we've seen them pull it out before against big teams that are way out their league," said Betsy Baehr, ORU Cheerleader.

"Pittsburgh's a pretty hot team, as Coach Sutton was just saying, but we've got some pretty hot guys, when we're on, we're on.  I'm excited to see how we play Thursday," said Cody Kielmeyer, ORU Cheerleader.

The Eagles faced the prospect of traveling to Tampa or Southern California, but instead will head to Denver, just a short flight away from Tulsa.

Fans hope the proximity of the game will prompt the ORU faithful to head west.

"Denver is a lot better than Tampa, or last year we were in Anaheim.  So that's way too far for a lot of people to travel. Denver's good, we'll take it," said Rhett Brooks, ORU Alum.

"It's Spring Break this week.  We'll be heading out there, giving them lots of support and love. Love if they lose, love them if they win," said Branden Nash, ORU Senior.

So once the excitement of the watch party faded, fans loaded up on Summit League Champion merchandise, then filed out of the Mabee Center, already dreaming of March Miracles.

"I don't doubt that they can do it. We always have faith in our team, true cheerleaders," said Betsy Baehr, ORU Cheerleader.

ORU cheerleaders tell us that Eli the Eagle will be going to Denver.  The student involved in that now-infamous mascot fight will not make the trip.  But one of the alternates is set to suit up and cheer on ORU.