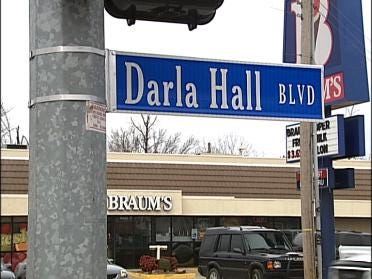 "Darla Hall Boulevard" was unveiled on Saturday afternoon in honor of a woman who has devoted her entire life to improving the community of Southwest Tulsa.

"I just want to say, may she rest in peace. And she's still here with us. Thank you," said Randi Miller, County Commissioner.

Darla Hall was one of only seven women to serve on the Tulsa City Council, she served the residents of District 2 for 10 years.

Darla passed away on Thursday after battling cancer.

On Saturday, city councilors and County Commissioner, Randi Miller, gathered at the corner of 51st and South 33rd West Avenue, to celebrate the life of their friend.

It's also the new location of "Darla Hall Boulevard".

"This is a celebration of Darla's life, it's a celebration of the work she did and I think its a call of service for all of us to continue that work of Southwest Tulsa," said Rick Westcott, City Councilor District 2.

Westcott tells The News On 6 there are only five streets in Tulsa that have been named after individuals.