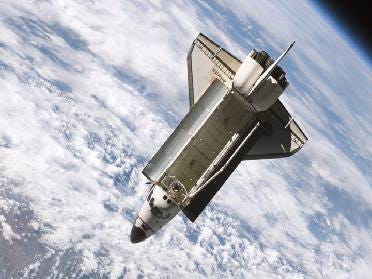 Oklahomans will be able to view the International Space Station, space shuttle Atlantis and a spy satellite Tuesday night.

The crew of the space shuttle Atlantis is preparing for Wednesday's landing after a two-week mission to the International Space Station. NASA wants Atlantis to land Wednesday so the military can safely shoot down a damaged satellite.

All three objects will be visible Tuesday evening:

The shuttle's crew inspected the shuttle's wing and nose with a laser-tipped boom to check for any possible micrometeorite damage. NASA is analyzing the data and will let the astronauts know Tuesday if they're cleared for landing.

The examination has become standard procedure ever since Columbia was destroyed on re-entry in 2003.

Atlantis is to touch down at the Kennedy Space Center if the weather is clear. If it's not, Atlantis will go to a backup landing site in California.