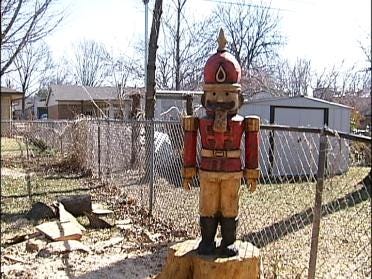 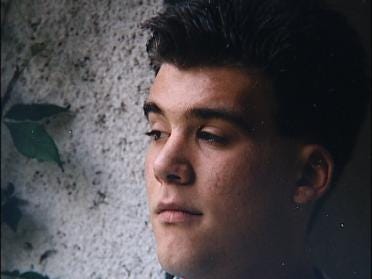 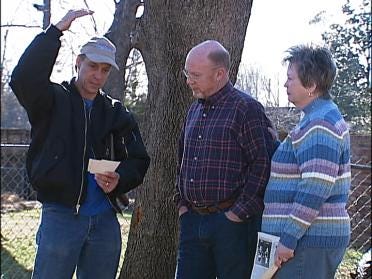 The News On 6's Rick Wells reported last month about a mid-town Tulsa couple who wanted chainsaw artist Clayton Coss to turn a storm damaged pecan tree into a tribute to their son.  Now the work is done.

A nutcracker now stands at attention in the back yard of Bill and Chris Ford's midtown home.

It's the creation of chainsaw artist Clayton Coss, a wooden figure cut out of a storm damaged tree trunk, to the Ford's it's so much more than that.

It's a tribute to their son Zeke who died almost a year ago.  When Zeke was a boy, he'd get a nutcracker each year for Christmas.

When the ice storm damaged their backyard pecan tree, they hoped Clayton Coss could give them something to remind them of Zeke.

Bill Ford had made Zeke a nutcracker, and they hoped Coss could find the image in that old tree.

They met last month to discuss the details then on Monday, Coss started cutting.

Once he got the tree in the shape he wanted, he went to work on the nutcracker.

"The nature of the tree is that it almost forced him to turn the nutcracker to look right in the window," said Ford.

When Zeke was a boy he used to climb the old pecan tree.

"We'd find him in that tree many times," said Chris Ford

Now when they sit inside the house and look out, it's as if a bit of Zeke is looking back at them.