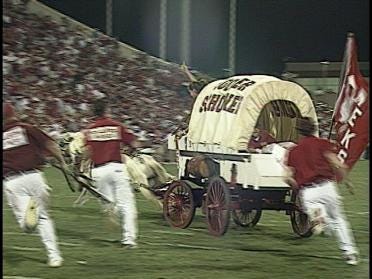 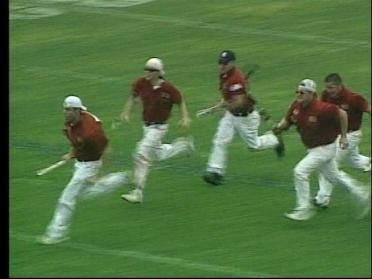 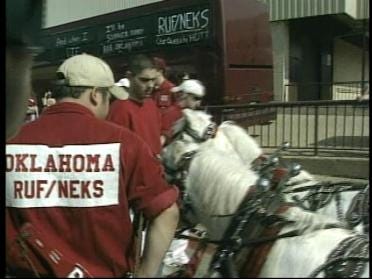 Next to the players wearing Crimson and Cream jerseys, the University of Oklahoma's Ruf/Neks may be the most recognizable people in Norman on game days.

As Stacey Cameron reports, the Ruf/Neks will be back on the sidelines next season, but with a different look.

When the O.U. Ruf/Neks take to the sidelines during OU football games next fall, the longtime Sooner supporters will be less like a fraternity and more like cheerleaders.

"I think there are a lot of positives that could come out of it," said O.U. Associate Athletic Director Kenny Mossman.

Mossman says the decision to make the Ruf/Neks an official O.U. spirit squad comes after 25 members of the group were suspended for allegedly hazing Ruff-Nek pledges last year.

"They've got a proud tradition that goes back a long time here and I don't think we want to disregard that at all," commented Mossman.

But as Mossman points out, the University of Oklahoma felt that to keep the Ruf/Neks tradition alive, O.U. had to oversee the group. So now, much like cheerleaders, Ruf/Neks are going to have to try out and win a position on the squad before gearing up for game day.

"I'm ready for all the drama to die down and to get the Ruf/Neks back," said O.U. student Lauren Brockman.

And more and more Sooner students are buying into the idea that the sideline bad boys are now going to tow the line.

"You know, we don't need to have that kind of reputation associated with our university," remarked O.U. student Jen Hawk.

"We're looking forward to seeing what that will be like," said Mossman.

Unlike in years past, the group will now have minimum G.P.A. and credit hour requirements. Some current Ruf/Neks aren't crazy about the idea of trying out for the group, but one advantage is O.U. will pay for traveling expenses and uniforms.