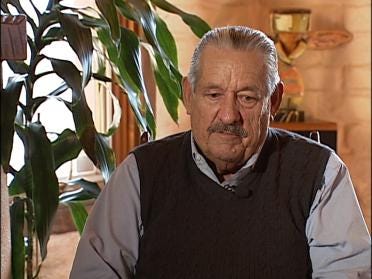 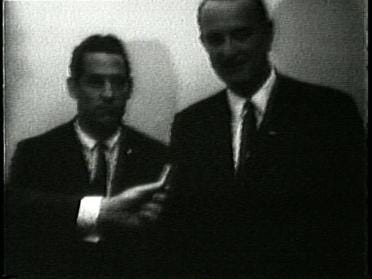 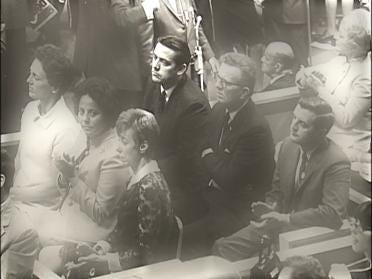 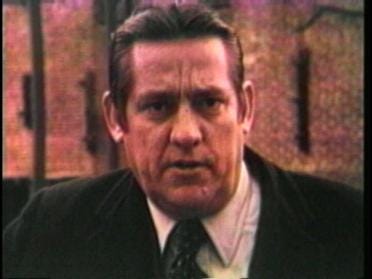 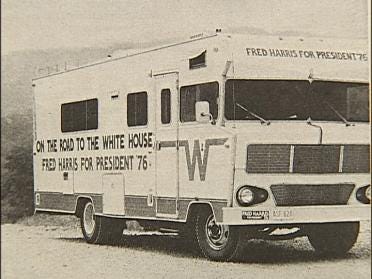 Will Rogers did it as a publicity stunt.  "Alfalfa" Bill Murray fancied it.  Robert L. Owen thought about it as a favor to a buddy.  And Robert S. Kerr flirted with it in '52.  But no Oklahoman ever came as close to capturing the White House as did Fred R. Harris.

"You run for president, you get on an airplane and go to Boston and give a speech, I said I used to pick cotton for a living and running for President's a lot easier than that," said Fred Harris.

Fred Harris wasn't thinking about the U.S. presidency on New Year's Day, 1963 when the aforementioned Senator Kerr dies of a heart attack.  The Democratic Governor, Howard Edmondson, seven days from the end of his term, resigns, and has himself appointed to Kerr's Senate seat by the new governor, former Lieutenant Governor George Nigh.  None of that sits well with Oklahomans, or with state senator Fred Harris, who challenges Senator Edmondson in the 1964 Democratic primary.

"People said to me, they used this word a lot, I don't like the underhanded way he got the job.  Well, I always thought that was funny, it wasn't underhanded, it was quite open," said Fred Harris.

On the strength of his prairie populism and a campaign song set to the tune of an Irish jig. "The man from Oklahoma, a man of common sense, we vote for Fred R. Harris, with a vote of confidence."

"It had just enormous success as far as name recognition and so forth people loved it and everywhere I went and ever since I've run into people who can sign that song," said Fred Harris.

Harris beats Edmondson in a run-off, and in November, tackles the Republican, Bud Wilkinson, the legendary football coach of the OU Sooners.

"I don't ask much of you people of Oklahoma, but I am going to ask this, please send me this young man, this trained man, this experienced man to help me help Oklahoma," said U.S. President Lyndon Baines Johnson.

"Somebody later said that in that campaign for the Senate, when Lyndon Johnson was running at the same time that I was hanging on Lyndon Johnson like a cheap suit, and there's a lot of truth to that," said Fred Harris.

In the U.S. Senate, Harris joins a massive Democratic majority and a liberal Oklahoma delegation in passing the programs of the Great Society.  The Civil Rights Act, aid to education, a push to end poverty.

"Really the defining issues of my life have been race and poverty," said Fred Harris.

Re-elected in 1966, Senator Harris pushes President Johnson to appoint a commission to investigate the causes of the rage that leave so many American cities in smoldering ruin that hot summer of 1967.  The result is the Kerner Commission, whose report, including its famous opening sentence, was penned by Harris.  "America's moving toward two societies, one white, one black, separate and unequal."

On the floor of the upper chamber, Harris sits between Walter Mondale and Robert Kennedy.

"When I went to the Senate, I was sure I would not like Robert Kennedy," said Fred Harris.

But the two become fast friends, and each would pay frequent visits to the other's home state, as RFK did at OU in 1967.

"It turned out I liked him inordinately, we became each other's best friends in the Senate," said Fred Harris.

While in the U.S. Senate, Harris served a year as chairman of the Democratic National Committee, and for the first time, opened the party's workings, and its conventions, to women and minorities, so that the party reflected the nation.

"I said what we want to do is make the Democratic Party democratic," said Fred Harris.

But all that wasn't enough for Fred Harris.  The U.S. Senate had run its course.  He wanted bigger challenges.

"I want to do, I want to have more impact, I want to have a chance to do more and that's why I wound up running for president," said Fred Harris.  "And I believe the fundamental problem in America is that too few people have all the money and power and everybody else has very little of either and that is not what Thomas Jefferson had in mind."

In 1976, after twice winning election to the United States Senate, Fred R. Harris of Walters, Oklahoma, launches a common-man's campaign for the White House.  Railing on against wealth and privilege.

"There's enough money to do what needs to be done in this country if we take the rich off welfare," said Fred Harris.

"I believe it's time to get the government back on the side of the people again," said Fred Harris.

"Populism I think just means you're against concentrated economic and political power," said Fred Harris.  "A kind of rural liberalism, based on southern culture and moral values."

Harris began his presidential campaign in a unique way.  Harris and wife LaDonna tour the country in a Winnebago.  His campaign is financed with garage sales.  He speaks in parks and from front porches.

"It's a strange kind of situation where farmers are going broke as they are while consumers can't afford to pay these food prices," said Fred Harris.

Woody Guthrie's son, Arlo gives him the rights to his father's most famous song.  "By supporting Fred Harris in our Democratic primary, we can make this land our land again."  And in the Iowa caucus that year, it was good enough for a fourth place finish, behind Birch Bayh, Jimmy Carter and "uncommitted".  No one paid attention to Fred's second place showing the following week in the Oklahoma primary.

"There's something wrong," said Fred Harris. "But in the meantime, we've lost weeks in New Hampshire and we never were able to recover out of that."

Fourth place in New Hampshire doomed Fred Harris to a footnote.  Out of money, desperate to pay off a second mortgage on his home, he ended up with 9 delegates at that year's party convention.  But not a single regret.

"I ran for President of the United States and said exactly what I believed," said Fred Harris.

Still teaching at the University of New Mexico, Fred and his wife of 25 years, Margaret Elliston, stay active bicycling, skiing and hiking.  He is become as iconic in New Mexican Democratic politics as the grizzled old cottonwoods that hang tough in New Mexico.

"And New Mexico's fun because it's a small town and everybody knows everybody," said Fred Harris.

He's a prolific author, having penned 18 books and 3 best-selling mysteries set in Oklahoma.  He's working on another mystery, an update of the Kerner Report, and his memoir is published in April by the OU Press.

"Fiction, I like, you can make people do what you want 'em to do," said Fred Harris.

He can't shake politics.  Fred's a Democratic Party 'Super Delegate,' and four years ago, he was on the floor of the Democratic National Convention.  That old prairie fire still burns inside.  He's still trying to get his country to catch-up with him.

"America's not gonna be a stable and secure and safe society that affords us self-esteem unless we get at these problems of racism and poverty again," said Fred Harris.

His old message had been carried by a new messenger this year.

"I like John Edwards a great deal, John said to me once 'you're my hero', what I like is he's the first person in 40 years, well, since me, I guess, who on the national scene, talked about poverty," said Fred Harris.

Still, the old populist is backing a new face.

"I just felt like I couldn't turn my back on the first African-American who has a real chance to be elected president," said Fred Harris.

And what of "what-if's" and "might-have-beens?"  How would the country have fared with a President Fred Harris?  Allow an old warhorse to ponder the legacies of a Presidency that never came to pass.

That would have been quite a country.