Top-ranked Stanford came into Pauley Pavilion on Saturday and got everything it wanted in an 85-79 victory over No. 12 UCLA.

``We live for games like this,'' said Casey Jacobsen, one of four Cardinal starters with 16 points. ``Sometimes we don't get the national recognition we deserve and we feel kind of cheated.''

``We had a chip on our shoulder because they were the only team to beat us,'' said Ryan Mendez, who had 16 points and hit all 10 of his free throws over the final 2:54. ``All you think about is winning.''

A second victory over a No. 1 team and a share of their first conference championship in four years was on the Bruins' minds. But that's gone now as UCLA (20-7, 13-3) dropped two games behind the Cardinal with two games remaining.

``Very disappointing,'' said Matt Barnes, who scored a career-high 32 points. ``We had a chance to win the Pac-10. We had to work too hard to come back. When we came back, they just kept going.''

Stanford handled UCLA's defensive pressure, frequently beating the press with high passes and then getting the ball down low to its big men.

``We were precise against their press. We made them pay for using it,'' said Michael McDonald, who had 10 points and six assists. ``It feels great to avenge our only loss.''

Jason Collins had 16 points and Jarron Collins added 16 points and 10 rebounds as the Cardinal dominated the boards 40-27 in winning its fourth straight at Pauley Pavilion. Jacobsen rebounded from his 4-of-18 shooting in the teams' previous meeting.

Earl Watson added 19 points in his final home game and his three steals made him UCLA's career leader with 226, overtaking Tyus Edney, who had 224 from 1992-95.

``They played better, but we didn't play as a team,'' said Watson, who received four stitches after taking an elbow to his chin. ``There was too much individualism.''

The Bruins never got closer than four points early in the second half as cold shooting and turnovers plagued them during an eight-minute stretch.

That's when the Cardinal outscored UCLA 15-10 to take a 71-61 lead. Jacobsen scored five straight in the spurt when the Bruins missed open shots and turned the ball over on three of four possessions.

Dan Gadzuric, UCLA's 6-foot-11 center, picked up two fouls in the game's first five minutes. He had two consecutive dunks to draw UCLA within five, but couldn't get going inside against Stanford's big men.

``Dan is the heart and soul of this team in the paint and we need him,'' Watson said.

``We never made that late, last surge,'' Kapono said. ``We always felt we were down and they kept scoring on us. We didn't play strong defense.''

Trailing by five in the first half, Stanford ran off 15 straight points to take a 28-18 lead with 8:45 remaining. The Bruins missed seven straight shots while the Cardinal were 7-of-8 in the spurt.

``I can't feel sorry. It was a good effort,'' UCLA coach Steve Lavin said. ``Stanford did a good job of pressuring the ball and smothering our 3-point shooters.''

After a 3-pointer by Jacobsen gave Stanford its largest lead of 11 points, Barnes and Watson went to work. They combined to score 20 of UCLA's final 22 points of the half and twice pulled the Bruins within one before Stanford ended the half leading 45-40.

Barnes' and Watson's quickness allowed them to drive inside and around 6-11 Jarron Collins and 6-8 Justin Davis.

Johnny Resendiz More than 100 OSU students toured the Greenwood District in Tulsa Saturday morning. University leaders said the tour is designed to show students the past, the present and what could be the future. 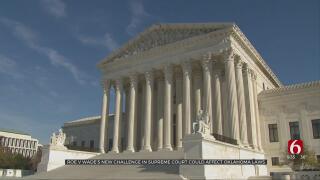 What A Supreme Court Rejection Of Roe V. Wade Would Mean For Oklahoma

Grant Stephens Saturday marked the 49th anniversary of the Roe v. Wade Supreme Court ruling on abortion rights. On its anniversary, Roe is back in the Supreme Court facing its most significant challenge in decades.
View More Stories