NEW YORK (AP) _ Michael Nylander scored three times, linemate Jaromir Jagr set up four goals, and Henrik Lundqvist stopped all 21 shots he faced as the New York Rangers routed the Atlanta Thrashers 7-0 Tuesday night and moved to the brink of the second round of the playoffs.

New York followed up a pair of one-goal wins over the Thrashers in Atlanta with a thorough dismantling of Kari Lehtonen and the Southeast Division champions to take a 3-0 series lead.

The Rangers can become the first NHL to advance in this year's playoffs on Wednesday night at Madison Square Garden. Atlanta is reeling and will go back to goalie Johan Hedberg in Game 4 in a desperate attempt to extend its season.

``We understand this is far from over,'' Rangers coach Tom Renney said. ``As much as the record might suggest otherwise, it's not over at all.''

Only twice in NHL history has a team recovered from an 0-3 hole to advance. But the Thrashers showed little sign they have near what it takes to even get the series back home for a Game 5.

``There is not a single individual play, moment, or part of the game that mattered,'' forward Bobby Holik said. ``It was about a lack of passion. It had nothing to do with skill or talent. It was about heart and desire.''

Lehtonen got the curious start over Hedberg and then endured a beating as the Rangers scored three times in the first period and kept going over the final 40 minutes.

Nylander scored the first of his three goals 32 seconds after the opening faceoff and paved the way for the Rangers' blowout that put them within a win of the second round for the first time in a decade.

``It felt like everything was working for us,'' Lundqvist said of the Rangers, 3-for-9 on the power play. ``It's not every night, especially not in the playoffs, when everything just seems to work for you.''

Tell that to his young counterpart.

Lehtonen was touched for seven goals on 35 shots. That was enough for the Rangers' victory theme ``Sweet Caroline'' to play with 5:16 remaining over chants of ``Sweep! Sweep!''

``It's the time when you really want to make the difference and you want to make them mad when you're playing in a place like this,'' Lehtonen said. ``But today they are happy.''

Jagr assisted on all of Nylander's scores and they teamed to set up defenseman Malik for another that made it 3-0 at 12:26.

Thrashers coach Bob Hartley, who went back to Lehtonen _ the Game 1 loser _ even though Hedberg played well in Game 2, called timeout after Malik's goal. Lehtonen skated to the bench to regroup while Hedberg took a calm squirt of water.

The break only brought temporary relief to Lehtonen and the Thrashers, on the verge of a sweep in their first playoff appearance.

``Kari Lehtonen is a young goalie,'' Hartley said. ``He played hard, he played very well for us but he was by himself on the ice.''

The biggest offender might be Marian Hossa, who after a team-high, 100-point season is scoreless in the series with a minus-5 rating. Ilya Kovalchuk, second to him with 42 goals, has only one in the series. He resorted to fighting Sean Avery in the third period and earned 17 penalty minutes overall.

Atlanta took 57 penalty minutes in the third when the deficit grew from five goals to seven.

``We have no time to fool around. It's just a matter of making sure that we get back on track. They're playing very well and we still didn't show up.''

A year ago, the Rangers were swept on their return to the postseason after missing seven straight times. Jagr and Lundqvist were hurt and New York was no match for New Jersey then, but this group earned the team's first home playoff win since 1997.

Lehtonen stopped 34 of 38 shots in the series-opening 4-3 loss and was worse upon his return. Hedberg made 37 saves in a much better performance Saturday, allowing a fluke goal on Avery's bank shot from center ice and Shanahan's gimme off a perfect setup in front by Avery in the 2-1 defeat.

But Hartley started Lehtonen, the No. 2 overall pick in the 2002 draft and Atlanta's presumed goalie of the future.

The skating and zigzagging play by Jagr and Nylander looked every bit like the Harlem Globetrotters on ice. The only reason Lehtonen stayed in the game was Hartley didn't want to spend Hedberg, too.

``Seven nothing is the same as losing in overtime,'' Jagr said. ``They will be ready next game. They have nothing to lose.''

At Pittsburgh, defenseman Anton Volchenkov sent a slap shot from the slot for a goal midway through the third period and Ottawa moved within one victory of eliminating the Penguins.

Volchenkov scored only once in 78 games during the season and had one previous playoff goal.

Trevor Linden shoveled a rebound past Marty Turco with 5:31 left, and defenseman Willie Mitchell prevented a tie by sweeping a trickling puck off the goal line for visiting Vancouver. 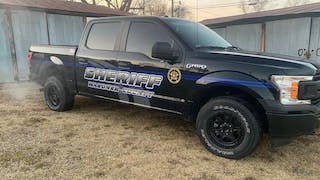 Reagan Ledbetter The family of a man shot and killed by Wagoner County deputies on January 16 said they have spent nearly a decade trying to get him help. The family said he struggled with his mental illness. 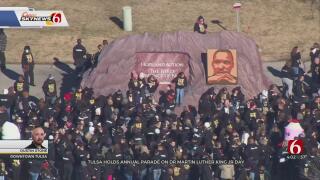 Dustin Stone Osage SkyNews6 had flown over the MLK Day Parade for several years, and Monday was by far one of the nicest days with calm winds and warm sunshine. It looks like the good weather brought out plenty of folks to watch the parade. Several hundred people were lined up near OSU-Tulsa, all the way down Greenwood Avenue. 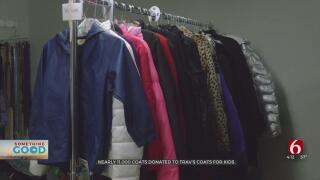 Travis Meyer Here's Something Good, nearly 11,000 kids will have a warm coat this winter thanks to your generous donations. Yale Cleaners told News On 6 that 10,800 coats were donated as part of the Trav's Coats for Kids program! 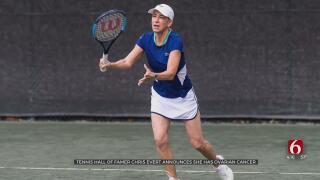 Shannon Rousseau Tennis great Chris Evert has revealed she is battling ovarian cancer. The 67-year-old lost her younger sister to the disease nearly two years ago. 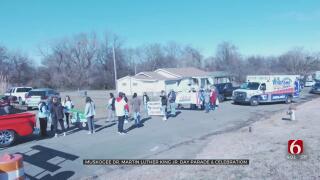 News On 6 People of Muskogee spent the day honoring the legacy of Doctor King. Attendees were treated to a pancake breakfast before the start of the parade. 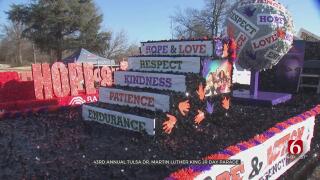 Meredith McCown Tulsans lined the downtown streets Monday for the 43rd Annual MLK Parade to pay tribute to the dream and legacy of Dr. King. Organizers say it’s one of the largest MLK Parades in the country.
View More Stories