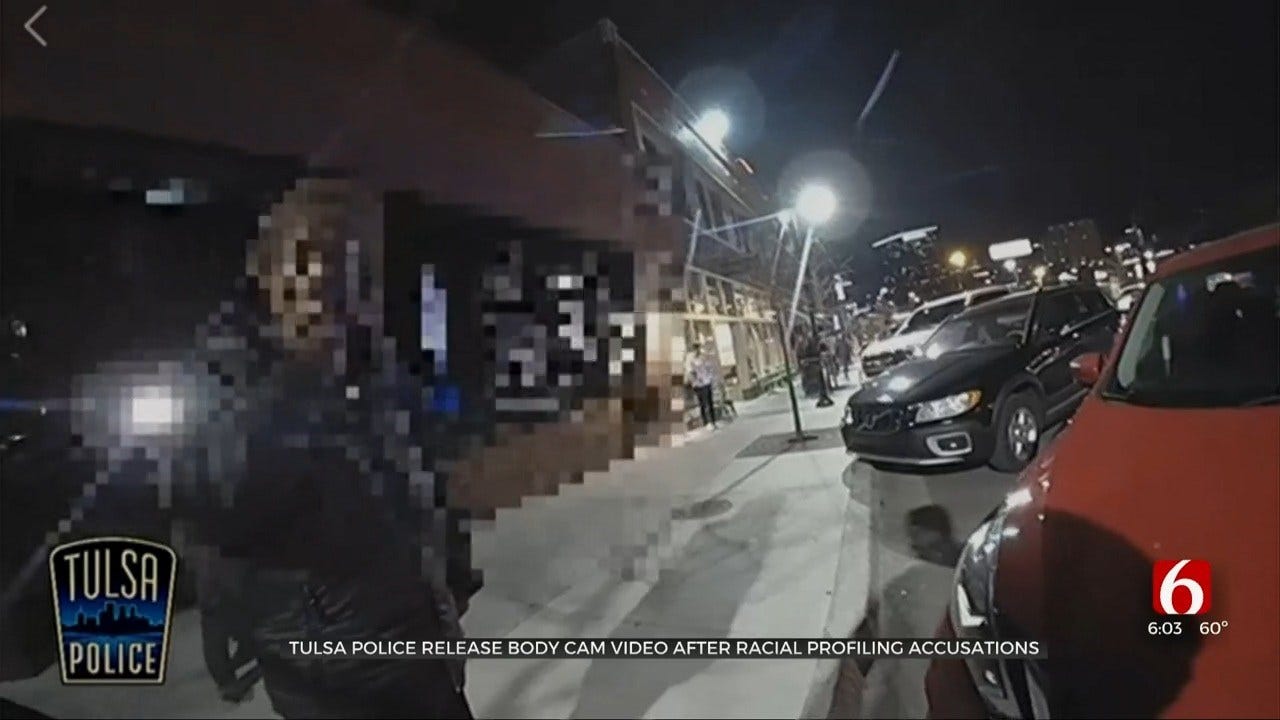 The quick interaction from Feb. 22 escalated into an investigation and ended with a woman in jail later.

Tulsa police shared the body camera video on its Facebook page Tuesday and said its officers record about 1,000 body camera interactions every day.

The department said it wanted to share this specific one to show "how different perceptions can create a wave of negative emotions."

"That's as personal as it gets, when someone accuses you of racial profiling, and it's always been a big topic against police officers,” said Sgt. David Weakley.

Weakley said he and another officer had a pleasant interaction with the woman while asking her about complaints that she was trespassing and aggressively asking for money.

He told News On 6 the woman gave police a name, it came back as having a clean record, and they even drove her home.

Weakley said he was shocked when Nate Morris, a Tulsa resident who has written for the Black Wall Street Times, shared a post on his personal Facebook page.

It read, in part, "A kind, black woman struggling with homelessness walked into a bakery asking for a ride and ended up being racially profiled."

"It was a very broad misrepresentation of facts,” said Weakley. “Everything in the claim was not true."

Weakley said the case took another turn when police found out this woman lied about her identity and was actually wanted on reports of harassing people outside businesses for weeks.

While Slaughter is in jail, Weakley said he's glad the ordeal is over and hopes his perspective can clear up any misinformation.

We are compassionate people,” said Weakley. “We help people that need help, and we put people in jail that need to go to jail."

Police said the Live PD program was there during this interaction, as they were riding with one of the officers that night and documented the encounter. However, this interaction was never broadcast on television for unknown reasons.

Police advise the public to contact a field supervisor or the Internal Affairs Division if you have any issues with the department.

"Yet again, we feel compelled to stand up and back up our officers who do an amazing job protecting the citizens of Tulsa 24 hours a day, despite constant spreading of misinformation from certain individuals within our community.

The most recent event happened this week with our downtown IMPACT team. A Tulsa resident, Nate Morris, who also claims to be a journalist, wrote a very inaccurate social media post that led to a Tulsa World news article. Lies like this and sharing misinformation, distract our attention from addressing real issues and takes away from all of our community policing efforts.

This isn’t the first-time false claims have been made about our officers; in fact, the list continues to grow longer and longer, and lies continue to spread and get media attention. From city leaders spreading false information about LivePD, to inaccurate statements made by citizens at city council meetings, to claims of racial profiling, to studies that don't rely on correct data; it brings us to ask, when will it stop? Do our officers not deserve better? Does our community not deserve better? We think so.

Our officers have been under constant criticism, despite willingly meeting demands for more transparency. Time after time, body camera footage, police reports, witness reports, and other documentation continues to show our officers use the highest level of professionalism and courtesy with each individual they encounter. We applaud their efforts and are impressed by their high level of professionalism despite always being criticized by individuals who seem more than eager to spread lies that meet their on-going agenda.

We are calling for Nate Morris, senior editor of the Black Wall Street times, to apologize to the citizen for assuming she was homeless and the victim of racial profiling. We also ask he apologize to our officers for lying and attempting to discredit the amazing work they do to help the citizens of Tulsa, no matter their race. Our officers are held accountable for all of their actions, which is proven by video documentation of their every move. It's time community activists, and "journalists" like Nate Morris be held to the same standard.

With that said, the Tulsa Fraternal Order of Police Lodge #93 reaffirms its commitment to the enforcement of law and providing constant support for our officers who need it now more than ever. We will continue to back our officers, and we thank everyone who supports us. We appreciate those who Back the Blue, and no matter what obstacles come our way, we will continue to protect every citizen of Tulsa and keep their families safe."

Morris told News On 6 he did not know about the Tulsa Fraternal Order of Police statement, which mentioned him by name. He said he no longer a senior editor at the Black Wall Street Times but contributes periodically on a volunteer basis.

“In response to the President of the Fraternal Order of Police's call for my public apology in an open letter:

This is Tulsa, Oklahoma. We are a city with a past rooted in racism. We may wish to believe that racism remained in the past, but it did not. It is still very much a part of our daily society - and no one is immune to it.

Racial bias plays a role in each of our lives on a daily basis - whether we are carrying that bias or receiving its affects. And we, especially white people, we have a responsibility to call it out when we see it in others and in ourselves.

When a Black woman walks into a primarily white business asking for support and ends up in front of three police cars and a national television show, it is undeniable that racial bias was a factor.

None of this is about a single officer or civilian - it is about a systemic reality in our city that we continue to try and minimize or avoid. To pretend that racism does not exist - to ignore the stories and concerns of community members from across our city - is to perpetuate that system.

Racial bias is real and prevalent.
Live PD perpetuates it.
We all, myself included, must do more to operate from a space of understanding and compassion.
We all must do more to build the type of city that every single Tulsan deserves.”