The Most Popular Cars by State

Americans have a diverse set of preferences when it comes to favorite car models, but some are perennial crowd-pleasers.

With more used than new car sales taking place per year, America’s best-selling cars may not be the hottest new vehicles on the market (in fact, the average age of a car in the United States is 11.8 years, according to IHS Markit). But they certainly are the most beloved, appealing to a wide array of drivers across multiple states. Many of the most popular cars have a reputation for reliability going back decades. Take the Chevrolet Malibu, for instance, which has been in production for over half a century. These tried and true models have stood the test of time and are still some of the most popular cars in the country.

To determine the most popular car models in America this year, the data science team at Insurify turned to their database of over 2 million car insurance applications. 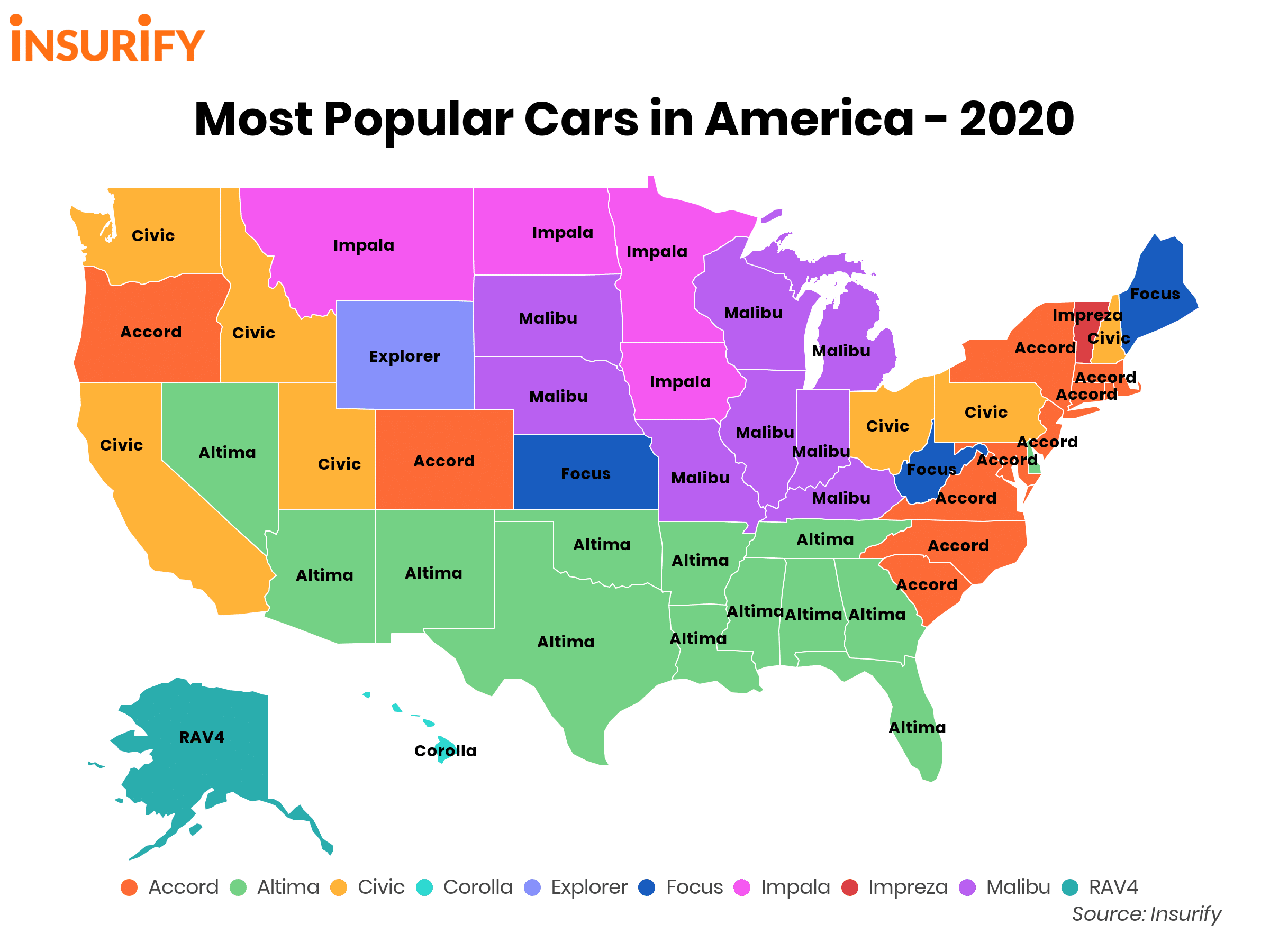 The data science team at Insurify, an insurance quotes comparison website, referred to its database of 2 million insurance applications. When applying for car insurance, car owners must disclose their driving history, including the make and model of the car they drive. Data was grouped by drivers’ state of residence, in order to determine the most popular car in each state. These cars were then ranked based on the number of states in which they occupied the number one slot, in terms of popularity.

The 10 Most Popular Cars in America

One of two SUVs to make the list this year, the compact crossover Toyota RAV4 is the tenth-most popular car in the United States. Popular across all states and America’s best-selling SUV in 2019, this IIHS top safety pick is especially preferred in Alaska. It’s easy to see why this car is such a crowd-pleaser in America’s most northern state, given its dependability in snow and in other adverse weather conditions. The Toyota RAV4 is also available as a hybrid model with competitive fuel efficiency, especially for an SUV, at 41/38 MPG for city and highway driving.

Ranking in eighth place this year is the Subaru Impreza, the favorite of Vermonters and the most affordable car on the list. This compact Subaru may be an unexciting drive at best, but it’s a capable car that delivers on reliability and safety. Unlike most other compact cars, the Impreza features an all-wheel-drive powertrain that makes it quite a capable car in snow. It’s a great choice for drivers up north, so we weren’t surprised to find this car to be a favorite of the Green Mountain State.

The Ford Explorer is the only midsize SUV to make the rankings this year and is Wyoming’s favorite car. Ford’s best selling SUV in 2019, the Explorer is also quite popular in the rest of the states. It’s the most costly vehicle on the list, with a starting price nearly twice that of the Impreza. U.S. News & World Report describes this SUV as just “OK” compared to its competitors, but given the Ford Explorer’s popularity, it seems that many Americans would beg to differ.

The iconic Toyota Corolla is another one of the most long-lived model lines on this, having first been introduced in 1966. The latest development in this compact car is the 2020 Corolla hybrid, which boasts a fuel efficiency of 53/52 MPG for city and highway driving. With an MSRP of $23,100, the Corolla hybrid costs a bit less than a Toyota Prius. Priced competitively, reliable year after year, and exceptionally safe, the Corolla isn’t going anywhere anytime soon.

Despite its discontinuation last year in 2019, the Ford Focus remains a favorite among drivers in the United States. The Focus features only 123 horsepower at the most basic trim level, so it’s certainly no Ford Mustang. But it’s not hard to see why this car remains a favorite among many Americans. One of the most affordable cars on the list, the Ford Focus is reliable, with better-than-average safety ratings and sporty steering and handling.

Ranking fifth this year for the most popular car in America, the Chevrolet Impala is the priciest car to make the list. Chevys are bestsellers in the Midwest, and the Impala is no exception, as the most popular car in Iowa, Minnesota, Montana, and North Dakota. This midsize family sedan is more roomy and powerful than its smaller cousin, the Chevy Malibu (ranking sixth on this list). The Chevrolet Impala line has been around longer than any other vehicle on this list—since 1958, to be exact—which is a testament to this car’s enduring popularity.

There are many reasons to love the Honda Civic, and it’s no wonder that this beloved compact car ranks within the top five this year. Typically preferred by younger drivers and commuters who do not need the cargo space of larger sedans and SUVs, the affordable Honda Civic is fuel-efficient, reliable, and responsive. The Civic is also one of the most versatile compact cars on the market, available as a coupe, sedan, and hatchback. The Honda Civic Type R is also available for those seeking a flashier, high-performance ride. Given the degree of customization possible, we weren’t surprised that the Civic is such a crowd-pleaser.

The second Chevy to make the list, the Chevrolet Malibu is the smaller, more affordable cousin of the Impala. Appealing to the eco-conscious, this midsize sedan also comes in a hybrid model, first introduced in 2009. Aside from the Chevrolet Impala, the Malibu is the longest-standing model line on the list, having first been introduced in 1964. Older model years of this car may be safer than the 2020 Malibu, which was awarded only 4 out of 5 stars this year by the NHTSA. By contrast, the 2017 Chevy Malibu was awarded Top Safety Pick by the IIHS (Insurance Institute for Highway Safety) when equipped with the available driver confidence package.

The Honda Accord is the second-most popular car in America. Like the Chevy Impala and Malibu, the Accord’s popularity is evergreen; first introduced in 1976, this beloved midsize sedan reached its tenth generation with the 2017 model. The Accord’s hybrid line was first introduced in 2005 and boasts an impressive fuel economy of nearly 50 MPG for both city and highway driving, despite its size. Unfortunately, what’s popular with drivers also tends to be popular with car thieves. Like the Honda Civic, the Honda Accord is one of the most stolen cars in America.

The Nissan Altima is the most popular car in America, according to Insurify’s analysis. Last year, the Altima ranked third but has since beat out the Honda Accord for first place. The Altima is yet another midsize sedan to make the top 10 list this year, but what sets it apart from most other cars on this list is the all-wheel-drive option available at some trim levels. In spite of what Consumer Reports describes as a “bland” driving experience, the Nissan Altima has high safety ratings and a spacious cabin. It’s a solid choice, as illustrated by its overwhelming popularity in 14 states this year.

If you have questions or comments about this article, please contact insights@insurify.com.