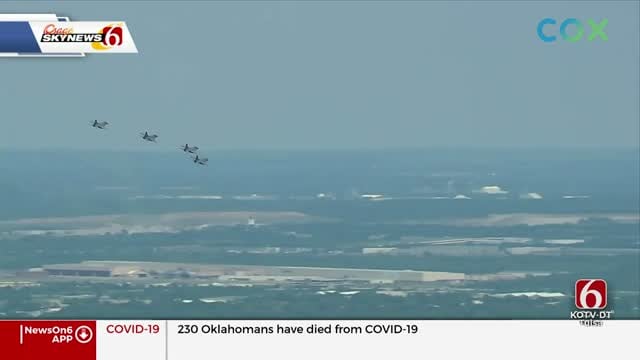 The 138th Fighter Wing put on quite the patriotic display.

This was a meticulously planned two days of flyovers for the Oklahoma National Guard.

The pilots say for every hour of flight time, there's at least 10 hours of maintenance work for each jet.

Osage SkyNews 6 HD shows the four F-16s with the Oklahoma National Guard 138th Fighter Wing, as its pilots were flying over Green Country.

It was a salute to the state's healthcare workers across Northeast Oklahoma.

"It's nice to give a little back, see everybody else on the frontlines doing all the fighting," 138th Operational Support Squadron Commander Eric Jauquet said.

Eric Jauquet was the lead pilot for today's flyovers.

The four pilots were flying in formation just a thousand feet above the ground, going 350 miles per hour.

The F-16's burn through 10 pounds of gas every mile. The flyovers used fuel that was already allocated, and the route had to be carefully planned and coordinated to be fuel-efficient.

"To be on a certain speed, altitude, and time, multiplied by 15 to 20 different locations, it can kind of compound that, so there's a bit of coordination on their end."

They started in Bartlesville. Then, this afternoon, the pilots passed over Wagoner, McAlester, Grove, and Vinita, before flying over Hillcrest Claremore. That's where Glenda Webb, Amy Peters, and their colleagues were watching.

"It makes us feel like we're recognized, and that we're appreciated for everything we're doing through this time," Amy Peters said.

The 138th Fighter Wing says they hope their presence was able to make a difference.

"If you can boost their spirits and morale, and anything like that it's, to us, it doesn't get any better," Jauquet said.